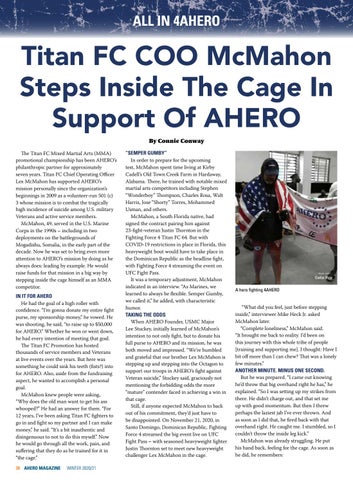 The Titan FC Mixed Martial Arts (MMA) promotional championship has been AHERO’s philanthropic partner for approximately seven years. Titan FC Chief Operating Officer Lex McMahon has supported AHERO’s mission personally since the organization’s beginnings in 2009 as a volunteer-run 501 (c) 3 whose mission is to combat the tragically high incidence of suicide among U.S. military Veterans and active service members. McMahon, 49, served in the U.S. Marine Corps in the 1990s – including in two deployments on the battlegrounds of Mogadishu, Somalia, in the early part of the decade. Now he was set to bring even more attention to AHERO’s mission by doing as he always does: leading by example. He would raise funds for that mission in a big way by stepping inside the cage himself as an MMA competitor. IN IT FOR AHERO He had the goal of a high roller with confidence. “I’m gonna donate my entire fight purse, my sponsorship money,” he vowed. He was shooting, he said, “to raise up to $50,000 for AHERO.” Whether he won or went down, he had every intention of meeting that goal. The Titan FC Promotion has hosted thousands of service members and Veterans at live events over the years. But here was something he could sink his teeth (fists?) into for AHERO. Also, aside from the fundraising aspect, he wanted to accomplish a personal goal. McMahon knew people were asking, “Why does the old man want to get his ass whooped?” He had an answer for them. “For 12 years, I’ve been asking Titan FC fighters to go in and fight so my partner and I can make money,” he said. “It’s a bit inauthentic and disingenuous to not to do this myself.” Now he would go through all the work, pain, and suffering that they do as he trained for it in “the cage.” 38 AHERO MAGAZINE

“SEMPER GUMBY” In order to prepare for the upcoming test, McMahon spent time living at Kirby Cadell’s Old Town Creek Farm in Hardaway, Alabama. There, he trained with notable mixed martial arts competitors including Stephen “Wonderboy” Thompson, Charles Rosa, Walt Harris, Jose “Shorty” Torres, Mohammed Usman, and others. McMahon, a South Florida native, had signed the contract pairing him against 23-fight-veteran Justin Thornton in the Fighting Force 4 Titan FC 64. But with COVID-19 restrictions in place in Florida, this heavyweight bout would have to take place in the Dominican Republic as the headline fight, with Fighting Force 4 streaming the event on UFC Fight Pass. It was a temporary adjustment, McMahon indicated in an interview. “As Marines, we learned to always be flexible. Semper Gumby, we called it,” he added, with characteristic humor. TAKING THE ODDS When AHERO Founder, USMC Major Lee Stuckey, initially learned of McMahon’s intention to not only fight, but to donate his full purse to AHERO and its mission, he was both moved and impressed. “We’re humbled and grateful that our brother Lex McMahon is stepping up and stepping into the Octagon to support our troops in AHERO’s fight against Veteran suicide,” Stuckey said, graciously not mentioning the forbidding odds the more “mature” contender faced in achieving a win in that cage. Still, if anyone expected McMahon to back out of his commitment, they’d just have to be disappointed. On November 21, 2020, in Santo Domingo, Dominican Republic, Fighting Force 4 streamed the big event live on UFC Fight Pass – with seasoned heavyweight fighter Justin Thornton set to meet new heavyweight challenger Lex McMahon in the cage.

“What did you feel, just before stepping inside,” interviewer Mike Heck Jr. asked McMahon later. “Complete loneliness,” McMahon said. “It brought me back to reality. I’d been on this journey with this whole tribe of people [training and supporting me]. I thought: Have I bit off more than I can chew? That was a lonely few minutes.” ANOTHER MINUTE. MINUS ONE SECOND. But he was prepared. “I came out knowing he’d throw that big overhand right he has,” he explained. “So I was setting up my strikes from there. He didn’t charge out, and that set me up with good momentum. But then I threw perhaps the laziest jab I’ve ever thrown. And as soon as I did that, he fired back with that overhand right. He caught me. I stumbled, so I couldn’t throw the inside leg kick.” McMahon was already struggling. He put his hand back, feeling for the cage. As soon as he did, he remembers: