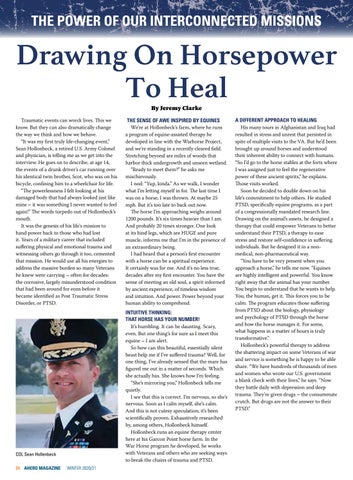 THE POWER OF OUR INTERCONNECTED MISSIONS

Drawing On Horsepower To Heal By Jeremy Clarke

Traumatic events can wreck lives. This we know. But they can also dramatically change the way we think and how we behave. “It was my first truly life-changing event,” Sean Hollonbeck, a retired U.S. Army Colonel and physician, is telling me as we get into the interview. He goes on to describe, at age 14, the events of a drunk driver’s car running over his identical twin brother, Scot, who was on his bicycle, confining him to a wheelchair for life. “The powerlessness I felt looking at his damaged body that had always looked just like mine – it was something I never wanted to feel again!” The words torpedo out of Hollonbeck’s mouth. It was the genesis of his life&#39;s mission to hand power back to those who had lost it. Years of a military career that included suffering physical and emotional trauma and witnessing others go through it too, cemented that mission. He would use all his energies to address the massive burden so many Veterans he knew were carrying – often for decades: the corrosive, largely misunderstood condition that had been around for eons before it became identified as Post Traumatic Stress Disorder, or PTSD.

INTUITIVE THINKING: THAT HORSE HAS YOUR NUMBER! It’s humbling. It can be daunting. Scary, even. But one thing’s for sure as I meet this equine – I am alert. So how can this beautiful, essentially silent beast help me if I’ve suffered trauma? Well, for one thing, I’ve already sensed that the mare has figured me out in a matter of seconds. Which she actually has. She knows how I’m feeling. “She’s mirroring you,” Hollonbeck tells me quietly. I see that this is correct. I’m nervous, so she’s nervous. Soon as I calm myself, she’s calm. And this is not cutesy speculation; it’s been scientifically proven. Exhaustively researched by, among others, Hollonbeck himself. Hollonbeck runs an equine therapy center here at his Garcon Point horse farm. In the War Horse program he developed, he works with Veterans and others who are seeking ways to break the chains of trauma and PTSD.

THE SENSE OF AWE INSPIRED BY EQUINES We’re at Hollonbeck’s farm, where he runs a program of equine-assisted therapy he developed in line with the Warhorse Project, and we’re standing in a recently cleared field. Stretching beyond are miles of woods that harbor thick undergrowth and unseen wetland. “Ready to meet them?” he asks me mischievously. I nod: “Yup, kinda.” As we walk, I wonder what I’m letting myself in for. The last time I was on a horse, I was thrown. At maybe 25 mph. But it’s too late to back out now. The horse I’m approaching weighs around 1200 pounds. It’s six times heavier than I am. And probably 20 times stronger. One look at its hind legs, which are HUGE and pure muscle, informs me that I’m in the presence of an extraordinary being. I had heard that a person’s first encounter with a horse can be a spiritual experience. It certainly was for me. And it’s no less true, decades after my first encounter. You have the sense of meeting an old soul, a spirit informed by ancient experience, of timeless wisdom and intuition. And power. Power beyond your human ability to comprehend.

A DIFFERENT APPROACH TO HEALING His many tours in Afghanistan and Iraq had resulted in stress and unrest that persisted in spite of multiple visits to the VA. But he’d been brought up around horses and understood their inherent ability to connect with humans. “So I’d go to the horse stables at the forts where I was assigned just to feel the regenerative power of these ancient spirits,” he explains. Those visits worked. Soon he decided to double down on his life’s commitment to help others. He studied PTSD, specifically equine programs, as a part of a congressionally mandated research line. Drawing on the animal’s assets, he designed a therapy that could empower Veterans to better understand their PTSD, a therapy to ease stress and restore self-confidence in suffering individuals. But he designed it in a nonmedical, non-pharmaceutical way. “You have to be very present when you approach a horse,” he tells me now. “Equines are highly intelligent and powerful. You know right away that the animal has your number. You begin to understand that he wants to help. You, the human, get it. This forces you to be calm. The program educates those suffering from PTSD about the biology, physiology and psychology of PTSD through the horse and how the horse manages it. For some, what happens in a matter of hours is truly transformative.” Hollonbeck’s powerful therapy to address the shattering impact on some Veterans of war and service is something he is happy to be able share. “We have hundreds of thousands of men and women who wrote our U.S. government a blank check with their lives,” he says. “Now they battle daily with depression and deep trauma. They’re given drugs – the consummate crutch. But drugs are not the answer to their PTSD.”

America’s Heroes Enjoying Recreation Outdoors (AHERO) has been serving wounded/injured service members and Veterans for ten years, offering opportunities that heal through time spent in activities and fellowship together with concerned citizens. AHERO Magazine is now in its third year! A full-color, high-quality, perfect-bound publication, this semi-yearly magazine advances AHERO’s mission to combat the tragic rate of suicide among Veterans and currently serving military members by bringing them together in outdoor enjoyment and camaraderie. On its pages, the stories told by our heroes – or on their behalf – often tell of the battle within, and the hope and help they received just being with their peers. In this, they are the message.