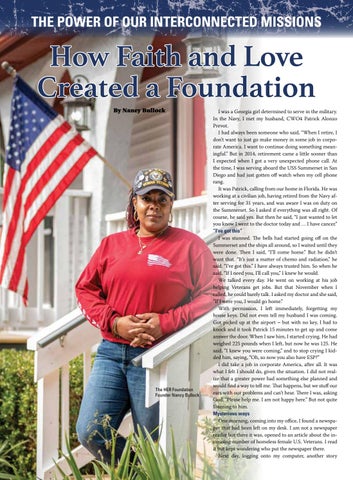 THE POWER OF OUR INTERCONNECTED MISSIONS

How Faith and Love Created a Foundation By Nancy Bullock

The HER Foundation Founder Nancy Bullock

I was a Georgia girl determined to serve in the military. In the Navy, I met my husband, CWO4 Patrick Alonzo Prevot. I had always been someone who said, “When I retire, I don’t want to just go make money in some job in corporate America. I want to continue doing something meaningful.” But in 2014, retirement came a little sooner than I expected when I got a very unexpected phone call. At the time, I was serving aboard the USS Summerset in San Diego and had just gotten off watch when my cell phone rang. It was Patrick, calling from our home in Florida. He was working at a civilian job, having retired from the Navy after serving for 31 years, and was aware I was on duty on the Summerset. So I asked if everything was all right. Of course, he said yes. But then he said, “I just wanted to let you know I went to the doctor today and … I have cancer.” “I’ve got this” I was stunned. The bells had started going off on the Summerset and the ships all around, so I waited until they were done. Then I said, “I’ll come home.” But he didn’t want that. “It’s just a matter of chemo and radiation,” he said. “I’ve got this.” I have always trusted him. So when he said, “If I need you, I’ll call you,” I knew he would. We talked every day. He went on working at his job helping Veterans get jobs. But that November when I called, he could barely talk. I asked my doctor and she said, “If I were you, I would go home.” With permission, I left immediately, forgetting my house keys. Did not even tell my husband I was coming. Got picked up at the airport – but with no key, I had to knock and it took Patrick 15 minutes to get up and come answer the door. When I saw him, I started crying. He had weighed 225 pounds when I left, but now he was 125. He said, “I knew you were coming,” and to stop crying I kidded him, saying, “Oh, so now you also have ESP?” I did take a job in corporate America, after all. It was what I felt I should do, given the situation. I did not realize that a greater power had something else planned and would find a way to tell me. That happens, but we stuff our ears with our problems and can’t hear. There I was, asking God, “Please help me. I am not happy here.” But not quite listening to him. Mysterious ways One morning, coming into my office, I found a newspaper that had been left on my desk. I am not a newspaper reader but there it was, opened to an article about the increasing number of homeless female U.S. Veterans. I read it but kept wondering who put the newspaper there. Next day, logging onto my computer, another story