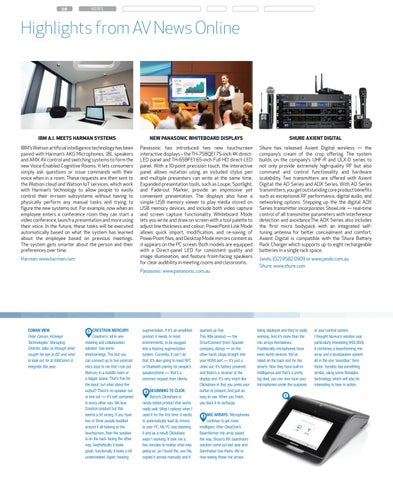 IBM’s Watson artificial intelligence technology has been paired with Harman’s AKG Microphones, JBL speakers and AMX AV control and switching systems to form the new Voice-Enabled Cognitive Rooms. It lets consumers simply ask questions or issue commands with their voice when in a room. These requests are then sent to the Watson cloud and Watson IoT services, which work with Harman’s technology to allow people to easily control their in-room subsystems without having to physically perform any manual tasks and trying to figure the new systems out. For example, now when an employee enters a conference room they can start a video conference, launch a presentation and more using their voice. In the future, these tasks will be executed automatically based on what the system has learned about the employee based on previous meetings. The system gets smarter about the person and their preferences over time.

Panasonic has introduced two new touchscreen interactive displays – the TH-75BQE1 75-inch 4K directLED panel and TH-65BFE1 65-inch Full HD direct-LED panel. With a 10-point precision touch, the interactive panel allows notation using an included stylus pen and multiple presenters can write at the same time. Expanded presentation tools, such as Loupe, Spotlight, and Fade-out Marker, provide an impressive yet convenient presentation. The displays also have a simple USB memory viewer to play media stored on USB memory devices, and include both video capture and screen capture functionality. Whiteboard Mode lets you write and draw on screen with a tool palette to adjust line thickness and colour; PowerPoint Link Mode allows quick import, modification, and re-saving of PowerPoint files; and Desktop Mode mirrors content as it appears on the PC screen. Both models are equipped with a Direct-panel LED for consistent quality and image illumination, and feature front-facing speakers for clear audibility in meeting rooms and classrooms.

Shure has released Axient Digital wireless — the company’s cream of the crop offering. The system builds on the company’s UHF-R and ULX-D series to not only provide extremely high-quality RF but also command and control functionality and hardware scalability. Two transmitters are offered with Axient Digital: the AD Series and ADX Series. With AD Series transmitters, you get outstanding core product benefits such as exceptional RF performance, digital audio, and networking options. Stepping up the the digital ADX Series transmitter incorporates ShowLink — real-time control of all transmitter parameters with interference detection and avoidance.The ADX Series also includes the first micro bodypack with an integrated selftuning antenna for better concealment and comfort. Axient Digital is compatible with the Shure Battery Rack Charger which supports up to eight rechargeable batteries in a single rack space.

COMAN VIEW Peter Coman, InDesign Technologies’ Managing Director, talks us through what caught his eye at ISE and what to look out for at InfoComm &amp; Integrate this year.

CRESTRON MERCURY: Crestron’s ‘all in one meeting and collaboration solution’ has some shortcomings. The fact you can connect up to two external mics says to me that I can put Mercury in a huddle room or a bigger space. That’s fine for the input, but what about the output? There’s no speaker out or line out — it’s self contained in every other way. We love Crestron product but this seems a bit wrong. If you have two or three people huddled around it all looking at the touchscreen, then the speaker is on the back facing the other way. Aesthetically it looks great; functionally it looks a bit undercooked. Again: hearing

augmentation. If it’s an amplified product it needs, in most environments, to be plugged into a hearing augmentation system. Currently, it can’t do that. It’s also going to need NFC or Bluetooth pairing for people’s speakerphone — that’s a common request from clients. BEGINNING TO CLICK: Barco’s Clickshare is nicely-styled product that works really well. What I noticed when I used it for the first time: it wants to automatically load its drivers to your PC. My PC was blocking it and as a result Clickshare wasn’t working. It took me a few minutes to realise what was going on, so I found the .exe file, copied it across manually and it

sparked up fine. This little product — the SmartConnect (from Spanish company, Abtus) — on the other hand, plugs straight into your HDMI port — it’s just a video out. It’s battery powered and there’s a receiver at the display end. It’s very much like Clickshare in that you press your button to present. And just so easy to use. When you finish, you dock it to recharge. MIC ARRAYS: Microphones continue to get more intelligent. After ClearOne’s Beamformer mic array paved the way, Shure’s MX boardroom solution came out last year and Sennheiser has theirs. We’re now seeing those mic arrays

being deployed and they’re really working. And it’s more than the mic arrays themselves. Traditionally microphones have been dumb devices. We’ve relied on the back end for the smarts. Now they have built-in intelligence and that’s a pretty big deal, you can now have your microphones under the auspices

of your control system. I thought Nureva’s solution was particularly interesting (HDL300). It combines a beamforming mic array and a loudspeaker system all in the one ‘soundbar’ form factor. Yamaha has something similar, using some Revolabs technology, which will also be interesting to hear in action. 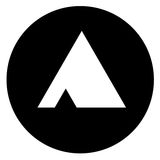