Io Triumphe! A magazine for alumni and friends of Albion College 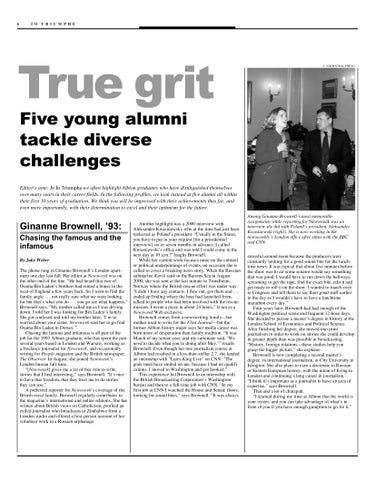 Five young alumni tackle diverse challenges Editor’s note: In Io Triumphe we often highlight Albion graduates who have distinguished themselves over many years in their career fields. In the following profiles, we look instead at five alumni all within their first 10 years of graduation. We think you will be impressed with their achievements thus far, and even more importantly, with their determination to excel and their optimism for the future.

Ginanne Brownell, ’93: Chasing the famous and the infamous By Jake Weber The phone rang in Ginanne Brownell’s London apartment one day last fall. Her editor at Newsweek was on the other end of the line. “He had heard that two of Osama Bin Laden’s brothers had rented a house in the west of England a few years back. So I went to find the family angle . . . not really sure what we were looking for but that’s what you do . . . you go see what happens,” Brownell says. “My mother called me as I was driving down. I told her I was looking for Bin Laden’s family. She got confused and told my brother later, ‘I’m so worried about your sister. Newsweek sent her to go find Osama Bin Laden in Dorset.’” Chasing the famous and infamous is all part of the job for the 1993 Albion graduate, who has spent the past several years based in London and Warsaw, working as a freelance journalist for Newsweek, and occasionally writing for People magazine and the British newspaper, The Observer. In August, she joined Newsweek’s London bureau full-time. “[Newsweek] gives me a lot of free rein to write stories that I find interesting,” says Brownell. “It’s nice to have that freedom, that they trust me to do stories they can use.” A preferred reporter for Newsweek’s coverage of the British royal family, Brownell regularly contributes to the magazine’s international and online editions. She has written about British views on Catholicism, profiled an exiled journalist who broadcasts to Zimbabwe from a London studio and offered a first-person account of her volunteer work in a Russian orphanage.

Another highlight was a 2000 interview with Aleksander Kwasniewski, who at the time had just been reelected as Poland’s president. “Usually in the States, you have to put in your request [for a presidential interview] six or seven months in advance. I called Kwasniewski’s office and was told I could come in the next day at 10 a.m.!” laughs Brownell. While her current work focuses more on the cultural or political underpinnings of events, on occasion she is called to cover a breaking news story. When the Russian submarine Kursk sank in the Barents Sea in August 2000, she was sent at the last minute to Trondheim, Norway where the British rescue effort was under way. “I didn’t have any contacts. I flew out, got there and . . . ended up finding where the boat had launched from, talked to people who had been involved with the rescue mission. I wrote a piece in about 24 hours.” It ran as a Newsweek Web exclusive. Brownell comes from a newswriting family—her mother used to write for the Flint Journal—but the former Albion history major says her media career was born more of desperation than family tradition. “It was March of my senior year, and my suitemate said, ‘We need to decide what you’re doing after May,’” recalls Brownell. Even though her one journalism course at Albion had resulted in a less-than-stellar 2.7, she landed an internship with “Larry King Live” on CNN. “The gods must have smiled on me, because I had no qualifications. I moved to Washington and got hooked.” This experience led Brownell to an internship with the British Broadcasting Corporation’s Washington bureau and then to a full-time job with CNN. “In my first job at CNN I watched the House and Senate floors, looking for sound bites,” says Brownell. “It was always

Among Ginanne Brownell’s most memorable assignments while reporting for Newsweek was an interview she did with Poland’s president, Aleksander Kwasniewski (right). She is now working in the newsweekly’s London office after stints with the BBC and CNN. stressful around noon because the producers were constantly looking for a good sound bite for the lunchtime news. It was typical that about five minutes before the show was to air some senator would say something that was good. I would have to run down the hallways, screaming to get the tape, find the exact bite, edit it and get ready to roll it on the show. I wanted to march over to Congress and tell them to say their good stuff earlier in the day so I wouldn’t have to have a lunchtime marathon every day.” Four years later, Brownell had had enough of the Washington political scene and frequent 12-hour days. She decided to pursue a master’s degree in history at the London School of Economics and Political Science. After finishing her degree, she moved into print journalism in order to work on stories she could develop in greater depth than was possible in broadcasting. “History, foreign relations—these studies help you grasp the bigger picture,” she explains. Brownell is now completing a second master’s degree, in international journalism, at City University in Islington. She also plans to earn a doctorate in Russian or Eastern European history, with the intent of living in London and continuing a long career in journalism. “I think it’s important as a journalist to have an area of expertise,” says Brownell. That and a lot of chutzpah. “I learned during my time at Albion that the world is your oyster, and you can take advantage of what’s in front of you if you have enough gumption to go for it.”

Io Triumphe! A magazine for alumni and friends of Albion College