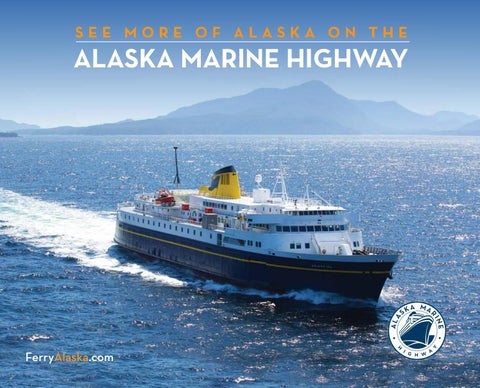 SEE MORE OF ALASKA ON THE

Fleet of vessels 35 port communities – 33 in Alaska 3,500 miles of scenic coastline Year-round service to most ports Summer service to the Aleutians and across the Gulf of Alaska. • Walk or drive on

Walk aboard, drive on or ride a bike. • Passenger space is almost always available • Cabin and car deck space fill up quickly – call ahead for reservations. • Traveling without a cabin? Set up a tent on the outer deck • Or, bring your sleeping bag and pull up a lounge chair in the heated solarium.

Pets are welcome on the car deck in your vehicle or a suitable pet carrier. The Purser will make pet calls on longer journeys so passengers can attend to pets.

Bicycles are a great way to get around the coastal communities.

The Alaska Marine Highway can connect you to dozens of communities, many not accessible from the road system.

• Vehicle rates are based on the width and length of your vehicle and the distance you are traveling. • Call ahead to reserve a spot on the car deck.

Check in at the terminal early for ease of loading.

Motorcycle owners are responsible for bringing their own tie-downs. Measuring your vehicle is crucial to ensure proper deck space.

Vessel crews will assist you with parking.

The Alaska Marine Highway offers many onboard amenities for a relaxing trip. • • • •

Cabins are sold per trip, not per person Cabins sell out quickly Food service is available on nearly all our vessels Most vessels feature observation lounges and solariums

Multiple cabin options, ranging from 2-berth inside cabins to 4-berth outside cabins with full facilities and a sitting area. There are many public places aboard.

Observation decks, lounges and solariums are a relaxing way to view spectacular scenery and wildlife.

Southeast Alaska The Inside Passage is a scenic wonderland, filled with Alaska Native culture and Gold Rush history. Drive aboard in Skagway and explore the Golden Circle Route. Or, walk on in Ketchikan for a tour of the Inside Passage before flying home from Juneau. Reasons to Visit: • • • • • • • • • •

Sitka Follow in the footsteps of the gold rush pioneers on the Golden Circle Route! Travelers have opportunities to enjoy heritage and historical sites, scenic beauty, countless hiking trails and wildlife viewing. Bike, kayak, hike and explore the communities over a few days. Whatever you choose to do, make sure to bring your camera and your passport!

A spectacularly scenic route that includes five communities in two countries: Kake From Whitehorse, Yukon drive to Skagway, Alaska Petersburg Board an Alaska Marine Highway ferry for the trip to Juneau, Alaska’s capital city, or go directly to Haines Wrangell Drive the Haines Highway, an Alaska Scenic Byway, to the junction with the Alaska Highway

the driving! Drive aboard the Alaska Marine Highway in our southern ports of Bellingham, Washington or Prince Rupert, British Columbia.

Drive on in Bellingham or Prince Rupert

Sit back and relax as we do the driving to Alaska. Travelers will enjoy the scenic route north and experience the communities of the Inside Passage, many of which are not accessible by the road system.

Explore the towns along the route to Juneau, the state capital

South Central Route Spectacular scenery awaits you in South Central and Interior Alaska. Drive aboard the ferry in Whittier and ride to Valdez, where you can connect with scenic roadways to Fairbanks.

See Alaska on this week-long adventure through Prince William Sound, South Central Alaska and beyond. Enjoy the heart of Alaska by ferry, rail and car. Fly into Anchorage and take the train or rent a car and drive to Denali National Park Ride the shuttle into the park to see North America’s largest peak Continue north on the train or by car to

Fairbanks, Alaska’s Golden Heart City After spending a day exploring the land of the midnight sun, drive the Richardson Highway to Valdez From Valdez, enjoy the spectacular scenery of Prince William Sound aboard a ferry to Whittier Drive through the famous Whittier Tunnel on your way back to Anchorage

Across the Gulf Set sail from Alaska’s capital city to the South Central port of Whittier, where you can connect to the main Alaska road system and explore Anchorage, Alaska’s largest city. The Alaska Marine Highway offers service between Juneau and Whittier twice per month in the summer, so be sure to make reservations well in advance.

Fly or ferry to Juneau and board the ferry to Whittier

Explore Anchorage and beyond

En route, get off for a quick one-hour exploration of Yakutat

Return to Juneau by highway and ferry or by plane

Southwest Route From wildlife to wilderness, find a place of beauty and rich culture in the communities of the Aleutian Islands. Most travelers exploring the Aleutians ride the ferry from Homer to Dutch Harbor and then return to Anchorage via plane. Reasons to Visit: • • • • • • • • •

Make a getaway to the green and lush island of Kodiak.

Travelers will enjoy a scenic drive on the Kenai Peninsula before connecting with the ferry for beautiful views of the Aleutian Range and the Gulf of Alaska.

Drive or walk on the ferry to Kodiak

Drive the island’s 100 miles of road. See the White Sands Beach and WWII sites. And watch for wildlife – from eagles to bears – along the way. Or, leave the car behind and explore the many museums in the downtown area.

Explore the Emerald Isle Ride the ferry back to Homer

The Alaska Marine Highway travels a route so special it’s been designated a National Scenic Byway and an All-American Road.

Explore the many Scenic Byways along our routes.

Alaska’s Scenic Byways The Marine Highway encompasses a route so spectacular it has been named an All-American Road, the nation’s highest honor. The U.S. Department of Transportation gives the designation of All-American Roads based on their cultural, historical, archeological, scenic, recreational and natural characteristics. This highway just happens to be the only one on water!

The Marine Highway is a great way to see wildlife. • Watch for wildlife from the deck of the ferry • Book a wildlife viewing trip in one of our port communities WILDLIFE

Playful sea otters are always curious to have a look.

Hundreds of bird species are viewable in Alaska.

Look for multiple species of whales, including pods of orcas.

Plenty of room to park.

With a route that stretches 3,500 miles, whales are often spotted by Alaska ferry travelers. Whales that can be found in Alaska’s waters include: Beluga

Sitka Humpbacks can be seen year-round in the rich feeding waters surrounding Sitka. Sitka WhaleFest is held annually in November, with educational events and activities. Best Time: Spring and Autumn

Juneau Orcas treat the water of the Inside Passage as their playground. Juneau boasts one of the largest concentrations of humpbacks found anywhere on the planet. Best Time: April to November

Seldovia &amp; Homer The belugas of Cook Inlet can be seen from our ports in Seldovia and Homer, all the way up to Alaska’s largest city, Anchorage. Best Time: Spring and Autumn

Kodiak Kodiak celebrates the return of the gray whale every April with Whale Fest Kodiak. You can also see humpbacks in the Barren Islands between Kodiak and Homer. Best Time: June and July

Glacier Bay National Park - Gustavus Some 274 species have been spotted here, each with their own seasonal patterns. Best Time: May 1 to mid-September

Copper River Delta - Cordova Witness the largest gathering of shorebirds in the western hemisphere as some 12 million shorebirds make their mid-migration stop. The Copper River Delta Shorebird Festival is celebrated in Cordova in mid-May. Best Time: Late April – May, Fall

Aleutian Islands Serious birders head to the Aleutians to view birds on their life lists. Visit the Izembek National Wildlife Refuge in Cold Bay for a chance to see the Aleutian Tern and continue on to Unalaska/ Dutch Harbor for a glimpse of the Whiskered Auklet. Best Time: May – September

Chilkat Valley - Haines The Chilkat Valley is home to 260 species of birds at different times of the year. Haines is known as “The Valley of Eagles” with as many as 3,500 in late fall. The Bald Eagle Festival is held each November. Best Time: October – December

Expeditions While bears can be seen in the wilderness throughout the state, the ferry can bring you to some awesome viewing areas. Visitors are not guaranteed to see bears but can better their chances by setting up a guided tour in remote viewing areas. Most locations are only accessible by floatplane or charter boat with advanced permitting required. Bears of Alaska:

Kodiak National Wildlife Refuge The 3,500 brown bears on Kodiak Island are a subspecies of the brown or grizzly bear and are the largest bears in the world, reaching up to 10 feet when standing. The 1.9 million-acre Kodiak National Wildlife Refuge is only accessible by floatplane or boat. Best time: Late May – Early October State of Alaska/Mark Kelley

Alaska Wildlife Conservation Center – Girdwood The non-profit center cares for injured and orphaned animals year-round. It is the permanent home to five bears. Our port in Whittier is a half-hour drive away. Best time: May – September

Let’s Go Fishing! Nearly every community along the Alaska Marine Highway’s route has a fishing derby or two. From salmon to halibut, you can fish your way through Alaska’s coastal communities. The best fishing times vary by community and whether you’re fishing in salt or fresh water.

Alaska is the largest U.S. state consisting of 586,412 square miles of land and 6,604 miles of coastline. If you include Alaska’s islands that brings the total to 33,904 miles of shoreline. The Alaska Marine Highway services an extensive 3,500-mile route. That’s farther than the drive from Key West, Florida to Seattle, Washington!

ALASKA IN PERSPECTIVE Alaska is the largest U.S. state consisting of 586,412 square miles of land area and 6,604 miles of coastline. If you include Alaska’s