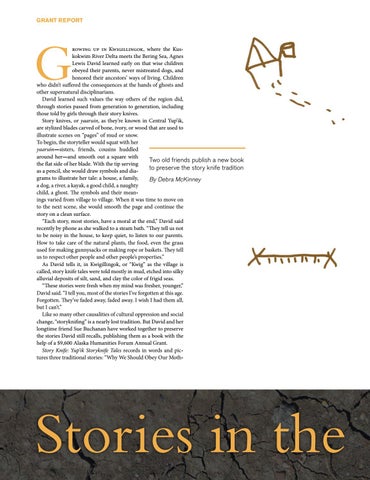 rowing up in Kwigillingok, where the Kuskokwim River Delta meets the Bering Sea, Agnes Lewis David learned early on that wise children obeyed their parents, never mistreated dogs, and honored their ancestors’ ways of living. Children who didn’t suffered the consequences at the hands of ghosts and other supernatural disciplinarians. David learned such values the way others of the region did, through stories passed from generation to generation, including those told by girls through their story knives. Story knives, or yaaruin, as they’re known in Central Yup’ik, are stylized blades carved of bone, ivory, or wood that are used to illustrate scenes on “pages” of mud or snow. To begin, the storyteller would squat with her yaaruin—sisters, friends, cousins huddled around her—and smooth out a square with Two old friends publish a new book the flat side of her blade. With the tip serving to preserve the story knife tradition as a pencil, she would draw symbols and diagrams to illustrate her tale: a house, a family, By Debra McKinney a dog, a river, a kayak, a good child, a naughty child, a ghost. The symbols and their meanings varied from village to village. When it was time to move on to the next scene, she would smooth the page and continue the story on a clean surface. “Each story, most stories, have a moral at the end,” David said recently by phone as she walked to a steam bath. “They tell us not to be noisy in the house, to keep quiet, to listen to our parents. How to take care of the natural plants, the food, even the grass used for making gunnysacks or making rope or baskets. They tell us to respect other people and other people’s properties.” As David tells it, in Kwigillingok, or “Kwig” as the village is called, story knife tales were told mostly in mud, etched into silky alluvial deposits of silt, sand, and clay the color of frigid seas. “These stories were fresh when my mind was fresher, younger,” David said. “I tell you, most of the stories I’ve forgotten at this age. Forgotten. They’ve faded away, faded away. I wish I had them all, but I can’t.” Like so many other causalities of cultural oppression and social change, “storyknifing” is a nearly lost tradition. But David and her longtime friend Sue Buchanan have worked together to preserve the stories David still recalls, publishing them as a book with the help of a $9,600 Alaska Humanities Forum Annual Grant. Story Knife: Yup’ik Storyknife Tales records in words and pictures three traditional stories: “Why We Should Obey Our Moth- 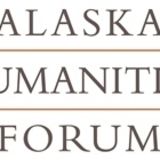