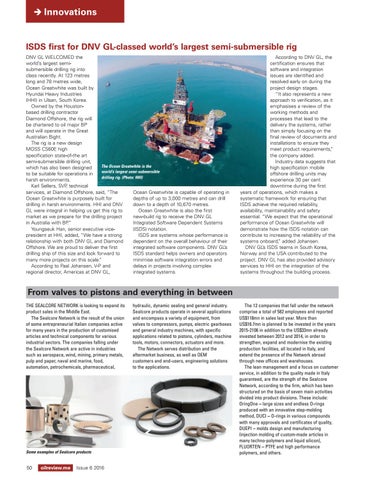 ISDS first for DNV GL-classed world’s largest semi-submersible rig DNV GL WELCOMED the world’s largest semisubmersible drilling rig into class recently. At 123 metres long and 78 metres wide, Ocean Greatwhite was built by Hyundai Heavy Industries (HHI) in Ulsan, South Korea. Owned by the Houstonbased drilling contractor Diamond Offshore, the rig will be chartered to oil major BP and will operate in the Great Australian Bight. The rig is a new design MOSS CS60E high specification state-of-the art semi-submersible drilling unit, The Ocean Greatwhite is the which has also been designed world’s largest semi-submersible to be suitable for operations in drilling rig. (Photo: HHI) harsh environments. Karl Sellers, SVP, technical services, at Diamond Offshore, said, “The Ocean Greatwhite is capable of operating in Ocean Greatwhite is purposely built for depths of up to 3,000 metres and can drill drilling in harsh environments. HHI and DNV down to a depth of 10,670 metres. GL were integral in helping us get this rig to Ocean Greatwhite is also the first market as we prepare for the drilling project new-build rig to receive the DNV GL in Australia with BP.” Integrated Software Dependent Systems Youngseuk Han, senior executive vice(ISDS) notation. president at HHI, added, “We have a strong ISDS are systems whose performance is relationship with both DNV GL and Diamond dependent on the overall behaviour of their Offshore. We are proud to deliver the first integrated software components. DNV GL’s drilling ship of this size and look forward to ISDS standard helps owners and operators many more projects on this scale.” minimise software integration errors and According to Paal Johansen, V-P and delays in projects involving complex regional director, Americas at DNV GL, integrated systems.

According to DNV GL, the certification ensures that software and integration issues are identified and resolved early on during the project design stages. “It also represents a new approach to verification, as it emphasises a review of the working methods and processes that lead to the delivery the systems, rather than simply focusing on the final review of documents and installations to ensure they meet product requirements,” the company added. Industry data suggests that high specification mobile offshore drilling units may experience 30 per cent downtime during the first years of operations, which makes a systematic framework for ensuring that ISDS achieve the required reliability, availability, maintainability and safety essential. “We expect that the operational performance of Ocean Greatwhite will demonstrate how the ISDS notation can contribute to increasing the reliability of the systems onboard,” added Johansen. DNV GL’s ISDS teams in South Korea, Norway and the USA contributed to the project. DNV GL has also provided advisory services to HHI on the integration of the systems throughout the building process.

From valves to pistons and everything in between THE SEALCORE NETWORK is looking to expand its product sales in the Middle East. The Sealcore Network is the result of the union of some entrepreneurial Italian companies active for many years in the production of customised articles and technical components for various industrial sectors. The companies falling under the Sealcore Network are active in industries such as aerospace, wind, mining, primary metals, pulp and paper, naval and marine, food, automation, petrochemicals, pharmaceutical,

Some examples of Sealcore products

hydraulic, dynamic sealing and general industry. Sealcore products operate in several applications and encompass a variety of equipment, from valves to compressors, pumps, electric gearboxes and general industry machines, with specific applications related to pistons, cylinders, machine tools, motors, connectors, actuators and more. The Network serves distribution and the aftermarket business, as well as OEM customers and end-users, engineering solutions to the applications.

The 12 companies that fall under the network comprise a total of 582 employees and reported US$118mn in sales last year. More than US$16.7mn is planned to be invested in the years 2015-2106 in addition to the US$33mn already invested between 2012 and 2014, in order to strengthen, expand and modernise the existing production facilities, all located in Italy, and extend the presence of the Network abroad through new offices and warehouses. The lean management and a focus on customer service, in addition to the quality made in Italy guaranteed, are the strength of the Sealcore Network, according to the firm, which has been structured on the basis of seven main activities divided into product divisions. These include: OringOne – large sizes and endless O-rings produced with an innovative step-molding method, DUCI – O-rings in various compounds with many approvals and certificates of quality, DUEPI – molds design and manufacturing (injection molding of custom-made articles in many techno-polymers and liquid silicon), FLUORTEN – PTFE and high performance polymers, and others.