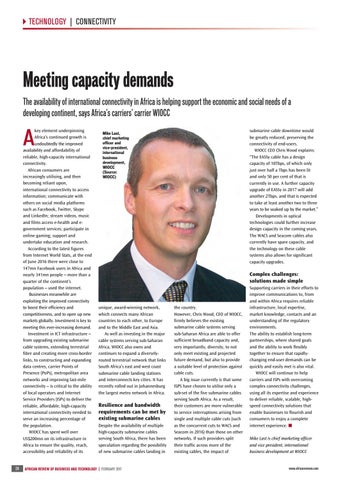 Meeting capacity demands The availability of international connectivity in Africa is helping support the economic and social needs of a developing continent, says Africa’s carriers’ carrier WIOCC key element underpinning Africa’s continued growth is undoubtedly the improved availability and affordability of reliable, high-capacity international connectivity. African consumers are increasingly utilising, and then becoming reliant upon, international connectivity to access information; communicate with others on social media platforms such as Facebook, Twitter, Skype and LinkedIn; stream videos, music and films access e-health and egovernment services; participate in online gaming; support and undertake education and research. According to the latest figures from Internet World Stats, at the end of June 2016 there were close to 147mn Facebook users in Africa and nearly 341mn people – more than a quarter of the continent’s population – used the internet. Businesses meanwhile are exploiting the improved connectivity to boost their efficiency and competitiveness, and to open up new markets globally. Investment is key to meeting this ever-increasing demand. Investment in ICT infrastructure – from upgrading existing submarine cable systems, extending terrestrial fibre and creating more cross-border links, to constructing and expanding data centres, carrier Points of Presence (PoPs), metropolitan area networks and improving last-mile connectivity – is critical to the ability of local operators and Internet Service Providers (ISPs) to deliver the reliable, affordable, high-capacity international connectivity needed to serve an increasing percentage of the population. WIOCC has spent well over US$200mn on its infrastructure in Africa to ensure the quality, reach, accessibility and reliability of its

submarine cable downtime would be greatly reduced, preserving the connectivity of end-users. WIOCC CEO Chris Wood explains: “The EASSy cable has a design capacity of 10Tbps, of which only just over half a Tbps has been lit and only 50 per cent of that is currently in use. A further capacity upgrade of EASSy in 2017 will add another 2Tbps, and that is expected to take at least another two to three years to be soaked up by the market.” Developments in optical technologies could further increase design capacity in the coming years. The WACS and Seacom cables also currently have spare capacity, and the technology on these cable systems also allows for significant capacity upgrades.

unique, award-winning network, which connects many African countries to each other, to Europe and to the Middle East and Asia. As well as investing in the major cable systems serving sub-Saharan Africa, WIOCC also owns and continues to expand a diverselyrouted terrestrial network that links South Africa’s east and west coast submarine cable landing stations and interconnects key cities. It has recently rolled out in Johannesburg the largest metro network in Africa.

the country. However, Chris Wood, CEO of WIOCC, firmly believes the existing submarine cable systems serving sub-Saharan Africa are able to offer sufficient broadband capacity and, very importantly, diversity, to not only meet existing and projected future demand, but also to provide a suitable level of protection against cable cuts. A big issue currently is that some ISPS have chosen to utilise only a sub-set of the five submarine cables serving South Africa. As a result, their customers are more vulnerable to service interruptions arising from single and multiple cable cuts (such as the concurrent cuts to WACS and Seacom in 2016) than those on other networks. If such providers split their traffic across more of the existing cables, the impact of

Supporting carriers in their efforts to improve communications to, from and within Africa requires reliable infrastructure, local expertise, market knowledge, contacts and an understanding of the regulatory environments. The ability to establish long-term partnerships, where shared goals and the ability to work flexibly together to ensure that rapidlychanging end-user demands can be quickly and easily met is also vital. WIOCC will continue to help carriers and ISPs with overcoming complex connectivity challenges, using all its expertise and experience to deliver reliable, scalable, highspeed connectivity solutions that enable businesses to flourish and consumers to enjoy a complete internet experience. ■ Mike Last is chief marketing officer and vice president, international business development at WIOCC 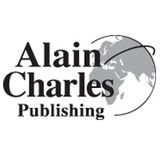