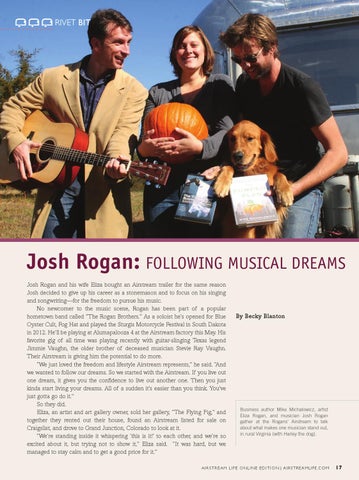 Josh Rogan: FOLLOWING MUSICAL DREAMS Josh Rogan and his wife Eliza bought an Airstream trailer for the same reason Josh decided to give up his career as a stonemason and to focus on his singing and songwriting—for the freedom to pursue his music. No newcomer to the music scene, Rogan has been part of a popular hometown band called “The Rogan Brothers.” As a soloist he’s opened for Blue Oyster Cult, Fog Hat and played the Sturgis Motorcycle Festival in South Dakota in 2012. He’ll be playing at Alumapalooza 4 at the Airstream factory this May. His favorite gig of all time was playing recently with guitar-slinging Texas legend Jimmie Vaughn, the older brother of deceased musician Stevie Ray Vaughn. Their Airstream is giving him the potential to do more. “We just loved the freedom and lifestyle Airstream represents,” he said. “And we wanted to follow our dreams. So we started with the Airstream. If you live out one dream, it gives you the confidence to live out another one. Then you just kinda start living your dreams. All of a sudden it’s easier than you think. You’ve just gotta go do it.” So they did. Eliza, an artist and art gallery owner, sold her gallery, “The Flying Pig,” and together they rented out their house, found an Airstream listed for sale on Craigslist, and drove to Grand Junction, Colorado to look at it. “We’re standing inside it whispering ‘this is it!’ to each other, and we’re so excited about it, but trying not to show it,” Eliza said. “It was hard, but we managed to stay calm and to get a good price for it.”

Business author Mike Michalowicz, artist Eliza Rogan, and musician Josh Rogan gather at the Rogans’ Airstream to talk about what makes one musician stand out, in rural Virginia (with Harley the dog). This special free Online Edition contains about 20 pages of the regular 64-page print issue of Airstream Life magazine. Subscribe for the f...

This special free Online Edition contains about 20 pages of the regular 64-page print issue of Airstream Life magazine. Subscribe for the f...