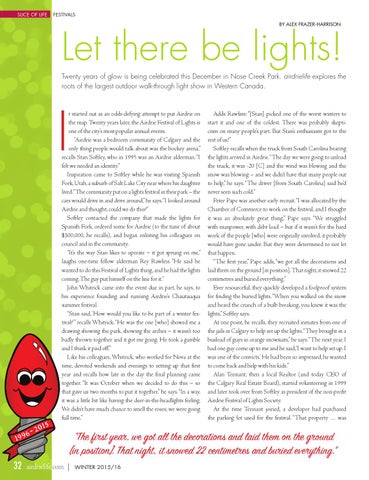 Let there be lights! Twenty years of glow is being celebrated this december in nose Creek Park. airdrielife explores the roots of the largest outdoor walk-through light show in Western Canada.

t started out as an odds-defying attempt to put Airdrie on the map. Twenty years later, the Airdrie Festival of Lights is one of the city’s most popular annual events. “Airdrie was a bedroom community of Calgary and the only thing people would talk about was the hockey arena,” recalls Stan Softley, who in 1995 was an Airdrie alderman. “I felt we needed an identity.” Inspiration came to Softley while he was visiting Spanish Fork, Utah, a suburb of Salt Lake City near where his daughter lived.“The community put on a lights festival in their park – the cars would drive in and drive around,” he says.“I looked around Airdrie and thought, could we do this?” Softley contacted the company that made the lights for Spanish Fork, ordered some for Airdrie (to the tune of about $300,000, he recalls), and began enlisting his colleagues on council and in the community. “It’s the way Stan likes to operate – it got sprung on me,” laughs one-time fellow alderman Rey Rawlins. “He said he wanted to do this Festival of Lights thing, and he had the lights coming. The guy put himself on the line for it.” John Whitrick came into the event due in part, he says, to his experience founding and running Airdrie’s Chautauqua summer festival. “Stan said, ‘How would you like to be part of a winter festival?’” recalls Whitrick. “He was the one [who] showed me a drawing showing the park, showing the arches – it wasn’t too badly thrown together and it got me going. He took a gamble and I think it paid off.” Like his colleagues, Whitrick, who worked for Nova at the time, devoted weekends and evenings to setting up that first year and recalls how late in the day the final planning came together. “It was October when we decided to do this – so that gave us two months to put it together,” he says. “In a way, it was a little bit like having the deer-in-the-headlights feeling. We didn’t have much chance to smell the roses; we were going full time.”

Adds Rawlins: “[Stan] picked one of the worst winters to start it and one of the coldest. There was probably skepticism on many people’s part. But Stan’s enthusiasm got to the rest of us!” Softley recalls when the truck from South Carolina bearing the lights arrived in Airdrie. “The day we were going to unload the truck, it was -20 [C] and the wind was blowing and the snow was blowing – and we didn’t have that many people out to help,” he says. “The driver [from South Carolina] said he’d never seen such cold.” Peter Pape was another early recruit. “I was allocated by the Chamber of Commerce to work on the festival, and I thought it was an absolutely great thing,” Pape says. “We struggled with manpower, with debt load – but if it wasn’t for the hard work of the people [who] were originally involved, it probably would have gone under. But they were determined to not let that happen. “The first year,” Pape adds, “we got all the decorations and laid them on the ground [in position]. That night, it snowed 22 centimetres and buried everything.” Ever resourceful, they quickly developed a foolproof system for finding the buried lights. “When you walked on the snow and heard the crunch of a bulb breaking, you knew it was the lights,” Softley says. At one point, he recalls, they recruited inmates from one of the jails in Calgary to help set up the lights.“They brought in a busload of guys in orange snowsuits,” he says. “The next year, I had one guy come up to me and he said, ‘I want to help set up. I was one of the convicts.’ He had been so impressed, he wanted to come back and help with his kids.” Alan Tennant, then a local Realtor (and today CEO of the Calgary Real Estate Board), started volunteering in 1999 and later took over from Softley as president of the non-profit Airdrie Festival of Lights Society. At the time Tennant joined, a developer had purchased the parking lot used for the festival. “That property … was

“The first year, we got all the decorations and laid them on the ground [in position]. That night, it snowed 22 centimetres and buried everything.” 32 airdrielife. airdrielife.com 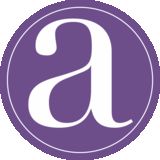 The hero issue! Read about the awesome people that are making Airdrie an even better place to call home.

The hero issue! Read about the awesome people that are making Airdrie an even better place to call home.