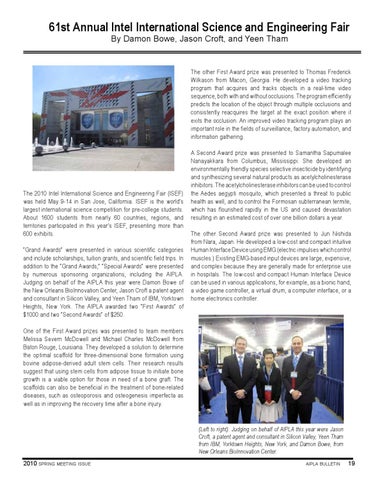 The other First Award prize was presented to Thomas Frederick Wilkason from Macon, Georgia. He developed a video tracking program that acquires and tracks objects in a real-time video sequence, both with and without occlusions. The program efficiently predicts the location of the object through multiple occlusions and consistently reacquires the target at the exact position where it exits the occlusion. An improved video tracking program plays an important role in the fields of surveillance, factory automation, and information gathering.

The 2010 Intel International Science and Engineering Fair (ISEF) was held May 9-14 in San Jose, California. ISEF is the world’s largest international science competition for pre-college students. About 1600 students from nearly 60 countries, regions, and territories participated in this year’s ISEF, presenting more than 600 exhibits. “Grand Awards” were presented in various scientific categories and include scholarships, tuition grants, and scientific field trips. In addition to the “Grand Awards,” “Special Awards” were presented by numerous sponsoring organizations, including the AIPLA. Judging on behalf of the AIPLA this year were Damon Bowe of the New Orleans BioInnovation Center, Jason Croft a patent agent and consultant in Silicon Valley, and Yeen Tham of IBM, Yorktown Heights, New York. The AIPLA awarded two “First Awards” of $1000 and two “Second Awards” of $250.

A Second Award prize was presented to Samantha Sapumalee Nanayakkara from Columbus, Mississippi. She developed an environmentally friendly species selective insecticide by identifying and synthesizing several natural products as acetylcholinesterase inhibitors. The acetylcholinesterase inhibitors can be used to control the Aedes aegypti mosquito, which presented a threat to public health as well, and to control the Formosan subterranean termite, which has flourished rapidly in the US and caused devastation resulting in an estimated cost of over one billion dollars a year. The other Second Award prize was presented to Jun Nishida from Nara, Japan. He developed a low-cost and compact intuitive Human Interface Device using EMG (electric impulses which control muscles.) Existing EMG-based input devices are large, expensive, and complex because they are generally made for enterprise use in hospitals. The low-cost and compact Human Interface Device can be used in various applications, for example, as a bionic hand, a video game controller, a virtual drum, a computer interface, or a home electronics controller.

One of the First Award prizes was presented to team members Melissa Severn McDowell and Michael Charles McDowell from Baton Rouge, Louisiana. They developed a solution to determine the optimal scaffold for three-dimensional bone formation using bovine adipose-derived adult stem cells. Their research results suggest that using stem cells from adipose tissue to initiate bone growth is a viable option for those in need of a bone graft. The scaffolds can also be beneficial in the treatment of bone-related diseases, such as osteoporosis and osteogenesis imperfecta as well as in improving the recovery time after a bone injury.

The publication of the 2010 Spring Meeting. Includes reports from Committees on their work and meetings held during the Meeting as well as links to advertisers who provide IP services. 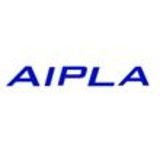