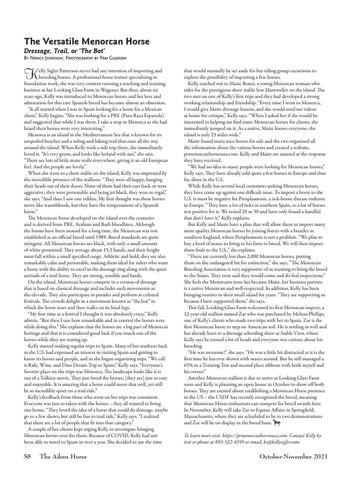 The Versatile Menorcan Horse Dressage, Trail, or ‘The Bot’

elly Sigler Patterson never had any intention of importing and breeding horses. A professional horse trainer specializing in foundation work, she was very content running a teaching and training business at her Looking Glass Farm in Wagener. But then, about six years ago, Kelly was introduced to Menorcan horses and her love and admiration for this rare Spanish breed has become almost an obsession. “It all started when I was in Spain looking for a horse for a Mexican client,” Kelly begins. “She was looking for a PRE (Pura Raza Espanola) and suggested that while I was there, I take a stop in Menorca as she had heard their horses were very interesting.” Menorca is an island in the Mediterranean Sea that is known for its unspoiled beaches and a riding and hiking trail that runs all the way around the island. When Kelly took a side trip there, she immediately loved it. “It’s very green, and looks like Ireland with sun,” she says. “There are lots of little stone walls everywhere, giving it an old European feel. And the people are lovely.” When she went to a show stable on the island, Kelly was impressed by the incredible presence of the stallions. “They were all happy, hanging their heads out of their doors. None of them had their ears back or were aggressive; they were personable and being jet black, they were so regal,” she says. “And then I saw one ridden. My first thought was these horses move like warmbloods, but they have the temperament of a Spanish horse.” The Menorcan horse developed on the island over the centuries and is derived from PRE, Arabian and Barb bloodlines. Although the horses have been around for a long time, the Menorcan was not established as an official breed until 1989. Breed standards are quite stringent. All Menorcan horses are black, with only a small amount of white permitted. They average about 15.3 hands, and their height must fall within a small specified range. Athletic and bold, they are also remarkably calm and personable, making them ideal for riders who want a horse with the ability to excel in the dressage ring along with the quiet attitude of a trail horse. They are strong, sensible and hardy. On the island, Menorcan horses compete in a version of dressage that is based on classical dressage and includes such movements as the elevade. They also participate in parades and perform at cultural festivals. The crowds delight in a movement known as “the bot” in which the horse rears and then walks on its hind legs. “My first time at a festival I thought it was absolutely crazy,” Kelly admits. “But then I saw how remarkable and in control the horses were while doing this.” She explains that the horses are a big part of Menorca’s heritage and that it is considered good luck if you touch one of the horses while they are rearing up. Kelly started making regular trips to Spain. Many of her students back in the U.S. had expressed an interest in visiting Spain and getting to know its horses and people, and so she began organizing trips. “We call it Ride, Wine, and Dine Dream Trip to Spain,” Kelly says. “Everyone’s favorite place on the trips was Menorca. The landscape looks like it is out of a Tolkien movie. They just loved the horses; [they are] just so easy and enjoyable. It is amazing that a horse could move that well, yet still be so incredibly quiet on a trail ride.” Kelly’s feedback from those who went on her trips was consistent. Everyone was just so taken with the horses – they all wanted to bring one home. “They loved the idea of a horse that could do dressage, maybe go to a few shows, but still be fun to trail ride,” Kelly says. “I realized that there are a lot of people that fit into that category.” A couple of her clients kept urging Kelly to investigate bringing Menorcan horses over for them. Because of COVID, Kelly had not been able to travel to Spain in over a year. She decided to use the time

that would normally be set aside for her riding group excursions to explore the possibility of importing a few horses. Kelly reached out to Maite Bonet, a young Menorcan woman who rides for the prestigious show stable Son Martorellet on the island. The two met on one of Kelly’s first trips and they had developed a strong working relationship and friendship. “Every time I went to Menorca, I would give Maite dressage lessons, and she would send me videos at home for critique,” Kelly says. “When I asked her if she would be interested in helping me find some Menorcan horses for clients, she immediately jumped on it. As a native, Maite knows everyone; the island is only 25 miles wide.” Maite found many nice horses for sale and the two organized all the information about the various horses and created a website, prmenorcanhorsesusa.com. Kelly and Maite are amazed at the response they have received. “We had no idea so many people were looking for Menorcan horses,” Kelly says. They have already sold quite a few horses in Europe and thus far, three in the U.S. While Kelly has several local customers seeking Menorcan horses, they have come up against one difficult issue. To import a horse to the U.S. it must be negative for Piroplasmosis, a tick-borne disease endemic in Europe. “They have a lot of ticks in southern Spain, so a lot of horses test positive for it. We tested 20 or 30 and have only found a handful that don’t have it,” Kelly explains. But Kelly and Maite have a plan that will allow them to import many more quality Menorcan horses by joining forces with a breeder in southern England, where Piroplasmosis is not a problem. “We plan to buy a herd of mares to bring to his farm to breed. We will then import those foals to the U.S.,” she explains. “There are currently less than 2,000 Menorcan horses, putting them on the endangered list for extinction,” she says. “The Menorcan Breeding Association is very supportive of us wanting to bring the breed to the States. They even said they would come and do foal inspections.” She feels the Menorcans trust her because Maite, her business partner, is a native Menorcan and well-respected. In addition, Kelly has been bringing tourists to their small island for years. “They are supporting us because I have supported them,” she says. This fall, Looking Glass Farm welcomed its first Menorcan import, a 12-year-old stallion named Zar who was purchased by Melissa Phillips, one of Kelly’s clients who made two trips with her to Spain. Zar is the first Menorcan horse to step on American soil. He is settling in well and has already been to a dressage schooling show at Stable View, where Kelly says he turned a lot of heads and everyone was curious about his breeding. “He was awesome!” she says. “He was a little bit distracted as it is the first time he has ever shown with mares around. But he still managed a 65% in a Training Test and second place ribbons with both myself and his owner.” Another Menorcan stallion is due to arrive at Looking Glass Farm soon and Kelly is planning an open house in October to show off both horses. They are excited about establishing a Menorcan Horse presence in the US – the USDF has recently recognized the breed, meaning that Menorcan Horse enthusiasts can compete for breed awards here. In November, Kelly will take Zar to Equine Affaire in Springfield, Massachusetts, where they are scheduled to be in two demonstrations and Zar will be on display in the breed barn. To learn more visit https://prmenorcanhorsesusa.com. Contact Kelly by text or phone at 803-522-4395 or email, ks@kellysigler.com.

The Aiken Horse October-November issue includes our annual Aiken Area Hunt Directory, Ask the Judge with Amy McElroy, coverage of the Best of the West horse auction and much more. 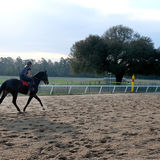