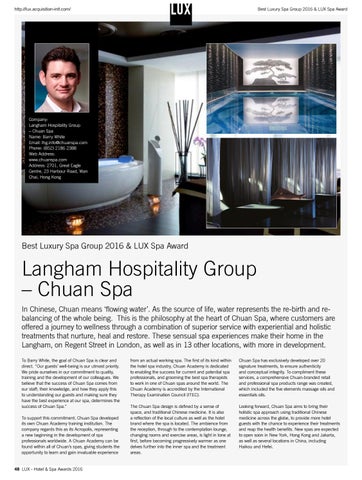 Langham Hospitality Group – Chuan Spa In Chinese, Chuan means ‘flowing water’. As the source of life, water represents the re-birth and rebalancing of the whole being. This is the philosophy at the heart of Chuan Spa, where customers are offered a journey to wellness through a combination of superior service with experiential and holistic treatments that nurture, heal and restore. These sensual spa experiences make their home in the Langham, on Regent Street in London, as well as in 13 other locations, with more in development. To Barry White, the goal of Chuan Spa is clear and direct. “Our guests’ well-being is our utmost priority. We pride ourselves in our commitment to quality, training and the development of our colleagues. We believe that the success of Chuan Spa comes from our staff; their knowledge, and how they apply this to understanding our guests and making sure they have the best experience at our spa, determines the success of Chuan Spa.” To support this commitment, Chuan Spa developed its own Chuan Academy training institution. The company regards this as its Acropolis, representing a new beginning in the development of spa professionals worldwide. A Chuan Academy can be found within all of Chuan’s spas, giving students the opportunity to learn and gain invaluable experience

from an actual working spa. The first of its kind within the hotel spa industry, Chuan Academy is dedicated to enabling the success for current and potential spa professionals, and grooming the best spa therapists to work in one of Chuan spas around the world. The Chuan Academy is accredited by the International Therapy Examination Council (ITEC).

Chuan Spa has exclusively developed over 20 signature treatments, to ensure authenticity and conceptual integrity. To compliment these services, a comprehensive Chuan-branded retail and professional spa products range was created, which included the five elements massage oils and essentials oils.

The Chuan Spa design is defined by a sense of space, and traditional Chinese medicine. It is also a reflection of the local culture as well as the hotel brand where the spa is located. The ambience from the reception, through to the contemplation lounge, changing rooms and exercise areas, is light in tone at first, before becoming progressively warmer as one delves further into the inner spa and the treatment areas.

Looking forward, Chuan Spa aims to bring their holistic spa approach using traditional Chinese medicine across the globe, to provide more hotel guests with the chance to experience their treatments and reap the health benefits. New spas are expected to open soon in New York, Hong Kong and Jakarta, as well as several locations in China, including Haikou and Hefei.