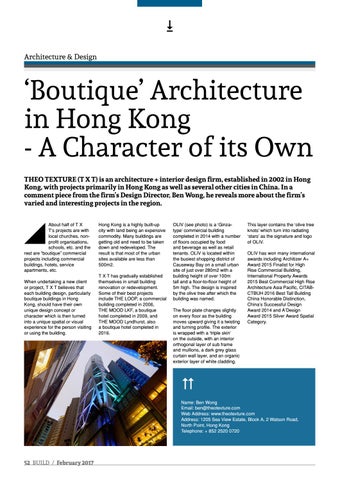 ‘Boutique’ Architecture in Hong Kong - A Character of its Own THEO TEXTURE (T X T) is an architecture + interior design firm, established in 2002 in Hong Kong, with projects primarily in Hong Kong as well as several other cities in China. In a comment piece from the firm’s Design Director, Ben Wong, he reveals more about the firm’s varied and interesting projects in the region. About half of T X T’s projects are with local churches, nonprofit organisations, schools, etc. and the rest are “boutique” commercial projects including commercial buildings, hotels, service apartments, etc. When undertaking a new client or project, T X T believes that each building design, particularly boutique buildings in Hong Kong, should have their own unique design concept or character which is then turned into a unique spatial or visual experience for the person visiting or using the building.

Hong Kong is a highly built-up city with land being an expensive commodity. Many buildings are getting old and need to be taken down and redeveloped. The result is that most of the urban sites available are less than 500m2. T X T has gradually established themselves in small building renovation or redevelopment. Some of their best projects include THE LOOP, a commercial building completed in 2006, THE MOOD LKF, a boutique hotel completed in 2009, and THE MOOD Lyndhurst, also a boutique hotel completed in 2016.

OLIV (see photo) is a ‘Ginzatype’ commercial building completed in 2014 with a number of floors occupied by food and beverage as well as retail tenants. OLIV is located within the busiest shopping district of Causeway Bay on a small urban site of just over 280m2 with a building height of over 100m tall and a floor-to-floor height of 5m high. The design is inspired by the olive tree after which the building was named. The floor plate changes slightly on every floor as the building moves upward giving it a twisting and turning profile. The exterior is wrapped with a ‘triple skin’ on the outside, with an interior orthogonal layer of sub frame and mullions, a dark grey glass curtain wall layer, and an organic exterior layer of white cladding.