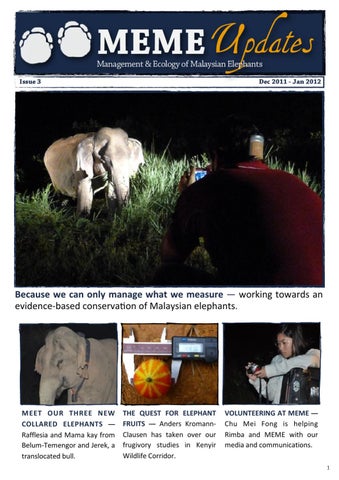 LONG-TERM WORK IN CONSERVATION SCIENCE This month, February 2012, we welcome the first PhD student at MEME, whose presence should contribute significantly improve to the quality of the research work we do. Indeed, nowadays most of the high quality ecological research is conducted in the form of PhD studies. This is, three-year research projects, in which the student does nothing else but investigating one narrow ecological question. Within this three-year period, a PhD candidate has to review the existing literature, design a feasible study plan, go to the field to collect good and representative data, analyze it, interpret the results, publish papers, write a thesis, and defend it in front of an intimidating tribunal. It is rarely more than one or two years the period a PhD student can afford to spend collecting novel ecological data in the field. But what happens if that particular year is hotter, or wetter, or otherwise different than usual? Or what if the study system itself is so variable that no single year is representative? Clearly, we need long-term projects to deal with the ecological variation that a PhD project cannot capture. This is especially true when studying long-lived wildlife species such as elephants, for which demographic reactions might take decades to manifest. We need longterm elephant studies. There are excellent examples of such studies in Africa, perhaps the most impressive of them being Cynthia Moss’ Amboseli and Ian Douglas Hamilton’s Lake Manyara & Save the Elephant initiatives. With up to four decades of history and a long list of PhD studies, scientific papers, and other outputs, these projects have drastically changed what we know about elephants. Only because elephant herds have been studied for decades, we are being able to grasp the complexity of their social organization and communication systems. There are no such impressive examples in Asia but continued research efforts such as those conducted by Prithiviraj Fernando and his team (CCR) in Sri Lanka are moving in the same direction, and are also changing what we know about Asian elephants. MEME is almost a new-born project but, from the very beginning, we have emphasized the need to run the project for a minimum of five years, hopefully more. We celebrate the presence of our new PhD student, look forward to the two more who will follow shortly, and hope they will build the solid scientific foundation that a long-term research project needs. In Kuala Lumpur, 31 Jan 2012

THREE NEW ELEPHANTS COLLARED! GPS-satellite tracking of elephant movements is our main activity at MEME. After six months of relative calm, in December 2011 the Department of Wildlife and National Parks (DWNP) and us collared three new elephants: Rafflesia, Mama Kay, and Jerek. We are especially excited about studying the movements of Rafflesia and Mama Kay because they are the first females and first non-conflict elephants we collar under this program. Rafflesia and Mama kay were collared along the Gerik-Jeli Highway, road that bisects the Belum-Temengor Forest Complex from East to West. They are the first of a number of elephants we intend to collar with the objective of (1) understanding whether the road represents a barrier for the movement of elephants in this, otherwise, continuous patch of forest; and (2) work with the Department of Wildlife and National Parks on the identification of suitable locations for the construction of wildlife viaducts that should provide safe crossing points for animals to move from one side to the other of the road. Besides questions pertaining their movements along highway, Rafflesia and Mama Kay will provide valuable information about the largely unknown social behavior of elephant herds in the tropical rainforests of Southeast Asia. Rafflesia was named after the gigantic flowers, which grow near the point she was collared. Mama Kay was named after Kay Arnold — Mama Gajah — a passionate elephant conservationist and one of MEME’s most important supporters. We ended up the year with the collaring of Jerek, a young conflict bull that the Department of Wildlife and National Parks translocated from Jeli (Kelantan) to Kenyir Wildlife Corridor (Terengganu). Monitoring the response of elephants to translocation is essential to assess the effectiveness of this management strategy and to design ways to improve it in the future. Jerek is the third translocated bull we collar, the previous two being Baung and Cherang. This number will be increased in the coming months. Thanks a lot to DWNP for making this work possible — especially to Dato Rasid (DG), En Nawayai (Perak’s Director), En Rahmat (Kelantan’s), En Yusoff (Terengganu’s), and the very good field teams that participated in this work!

VOLUNTEERING AT MEME “Dec to Jan will be a fairly slow season because of the monsoon”, Ahimsa said as we discussed my 3-month volunteering stint with MEME. He lied. 2 weeks into being a MEME volunteer I find myself awed, standing 10 steps away from a ginormous wild elephant trying to capture the perfect shot of the elephant collaring operation. So here I am, a Communications and Media Management undergraduate on her holidays, MEME’s official (albeit temporary) 'Design & Media Relationships Department'! Sanctioned with the task of documenting the project and assisting in MEME’s publication materials, I initially doubted how much contribution a few photos that I took would be able to make. However, throughout the project I learnt that conservation is not only about the science, it is also about public relations, getting public and private support, lobbying for laws and so much more. And this is where a few photos that I took would be able to make- it educates people, impacts people, changes people’s mind, action and support.

Chu Mei Fong with Mama Kay, one of our collared elephants in Belum-Temengor

I spent 1 month in the field and I was smacked by the realities of poaching, deforestation, development. It could not compare to what I have learnt from books and TV. Volunteering for MEME, has been an eye opener to say the least.

Mei is our first volunteer at MEME. She committed for a period of three months and came along with a smile and a set of skills that we were short of: graphic design and media communications. Having Mei in the team has come out as a very positive experience and we are likely to repeat in the future..

Rafflesia spotted along the Gerik-Jeli Highway

Perhilitan staff checking the condition of Mama Kayâ&#x20AC;&#x2122;s collar before

Checking the movements of Mama kay after her release

Jerek, a young bull from Jeli area, is waiting to be translocated

â&#x20AC;Ś and moving back into the forest

Puyee, one of our experienced field assistants

Anders Kromann-Clausen, from Yup, we thought MEMEâ&#x20AC;&#x2122;s Star Social Copenhagen University, has just Scientist might not survive the initiated an internship with MEME jungle trail. She did great! 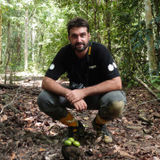 Newsletter of the research project Management & Ecology of Malaysian Elephants

Newsletter of the research project Management & Ecology of Malaysian Elephants