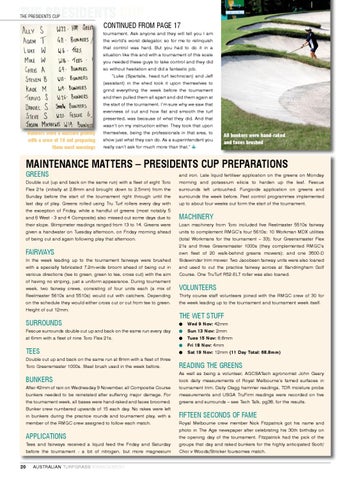 The Presidents Cup the presidents cup

tournament. Ask anyone and they will tell you I am the world’s worst delegator, so for me to relinquish that control was hard. But you had to do it in a situation like this and with a tournament of this scale you needed these guys to take control and they did so without hesitation and did a fantastic job. “Luke (Spartalis, head turf technician) and Jeff (assistant) in the shed took it upon themselves to grind everything the week before the tournament and then pulled them all apart and did them again at the start of the tournament. I’m sure why we saw that evenness of cut and how flat and smooth the turf presented, was because of what they did. And that wasn’t on my instruction either. They took that upon themselves, being the professionals in that area, to show just what they can do. As a superintendent you really can’t ask for much more than that.”

All bunkers were hand-raked and faces brushed

and iron. Late liquid fertiliser application on the greens on Monday

Double cut (up and back on the same run) with a fleet of eight Toro Flex 21s (initially at 2.8mm and brought down to 2.5mm) from the Sunday before the start of the tournament right through until the last day of play. Greens rolled using Tru Turf rollers every day with the exception of Friday, while a handful of greens (most notably 5 and 6 West - 3 and 4 Composite) also missed out some days due to their slope. Stimpmeter readings ranged from 13 to 14. Greens were given a handwater on Tuesday afternoon, on Friday morning ahead of being cut and again following play that afternoon.

morning and potassium silicia to harden up the leaf. Fescue surrounds left untouched. Fungicide application on greens and surrounds the week before. Pest control programmes implemented up to about four weeks out form the start of the tournament.

Fairways In the week leading up to the tournament fairways were brushed with a specially fabricated 7.2m-wide broom ahead of being cut in various directions (tee to green, green to tee, cross cut) with the aim of having no striping, just a uniform appearance. During tournament week, two fairway crews, consisting of four units each (a mix of Reelmaster 5610s and 5510s) would cut with catchers. Depending on the schedule they would either cross cut or cut from tee to green. Height of cut 12mm.

Surrounds Fescue surrounds double cut up and back on the same run every day at 6mm with a fleet of nine Toro Flex 21s.

Volunteers Thirty course staff volunteers joined with the RMGC crew of 30 for the week leading up to the tournament and tournament week itself.

Double cut up and back on the same run at 8mm with a fleet of three Toro Greensmaster 1000s. Steel brush used in the week before.

Bunkers After 42mm of rain on Wednesday 9 November, all Compositie Course bunkers needed to be reinstated after suffering major damage. For the tournament week, all bases were hand-raked and faces broomed. Bunker crew numbered upwards of 15 each day. No rakes were left in bunkers during the practice rounds and tournament play, with a member of the RMGC crew assigned to follow each match.

Applications Tees and fairways received a liquid feed the Friday and Saturday before the tournament - a bit of nitrogen, but more magnesium 20

Fifteen seconds of fame Royal Melbourne crew member Nick Fitzpatrick got his name and photo in The Age newspaper after celebrating his 30th birthday on the opening day of the tournament. Fitzpatrick had the pick of the groups that day and raked bunkers for the highly anticipated Scott/ Choi v Woods/Stricker foursomes match. 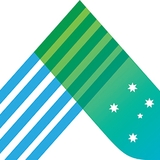