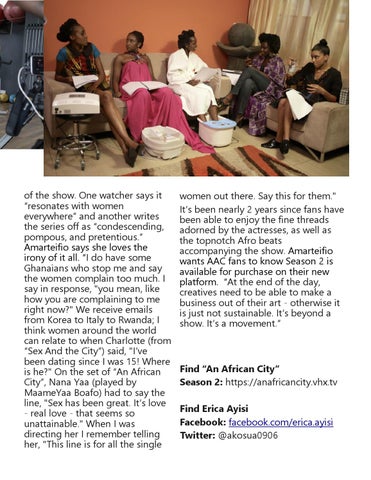 of the show. One watcher says it “resonates with women everywhere” and another writes the series off as “condescending, pompous, and pretentious.” Amarteifio says she loves the irony of it all. “I do have some Ghanaians who stop me and say the women complain too much. I say in response, "you mean, like how you are complaining to me right now?" We receive emails from Korea to Italy to Rwanda; I think women around the world can relate to when Charlotte (from “Sex And the City”) said, "I‟ve been dating since I was 15! Where is he?" On the set of “An African City”, Nana Yaa (played by MaameYaa Boafo) had to say the line, "Sex has been great. It‟s love - real love - that seems so unattainable." When I was directing her I remember telling her, "This line is for all the single

women out there. Say this for them." It‟s been nearly 2 years since fans have been able to enjoy the fine threads adorned by the actresses, as well as the topnotch Afro beats accompanying the show. Amarteifio wants AAC fans to know Season 2 is available for purchase on their new platform. “At the end of the day, creatives need to be able to make a business out of their art - otherwise it is just not sustainable. It‟s beyond a show. It‟s a movement.”