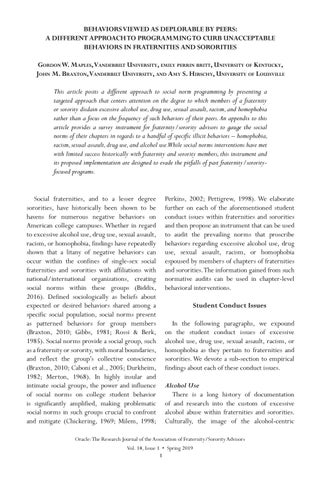 BEHAVIORS VIEWED AS DEPLORABLE BY PEERS: A DIFFERENT APPROACH TO PROGRAMMING TO CURB UNACCEPTABLE BEHAVIORS IN FRATERNITIES AND SORORITIES Gordon W. Maples, Vanderbilt University, emily perrin britt, University of Kentucky, John M. Braxton, Vanderbilt University, and Amy S. Hirschy, University of Louisville This article posits a different approach to social norm programming by presenting a targeted approach that centers attention on the degree to which members of a fraternity or sorority disdain excessive alcohol use, drug use, sexual assault, racism, and homophobia rather than a focus on the frequency of such behaviors of their peers. An appendix to this article provides a survey instrument for fraternity/sorority advisors to gauge the social norms of their chapters in regards to a handful of specific illicit behaviors – homophobia, racism, sexual assault, drug use, and alcohol use.While social norms interventions have met with limited success historically with fraternity and sorority members, this instrument and its proposed implementation are designed to evade the pitfalls of past fraternity/sororityfocused programs.

Social fraternities, and to a lesser degree sororities, have historically been shown to be havens for numerous negative behaviors on American college campuses. Whether in regard to excessive alcohol use, drug use, sexual assault, racism, or homophobia, findings have repeatedly shown that a litany of negative behaviors can occur within the confines of single-sex social fraternities and sororities with affiliations with national/international organizations, creating social norms within these groups (Biddix, 2016). Defined sociologically as beliefs about expected or desired behaviors shared among a specific social population, social norms present as patterned behaviors for group members (Braxton, 2010; Gibbs, 1981; Rossi & Berk, 1985). Social norms provide a social group, such as a fraternity or sorority, with moral boundaries, and reflect the group’s collective conscience (Braxton, 2010; Caboni et al., 2005; Durkheim, 1982; Merton, 1968). In highly insular and intimate social groups, the power and influence of social norms on college student behavior is significantly amplified, making problematic social norms in such groups crucial to confront and mitigate (Chickering, 1969; Milem, 1998;

Oracle: The Research Journal of the Association of Fraternity/Sorority Advisors Vol. 14, Issue 1 • Spring 2019 1