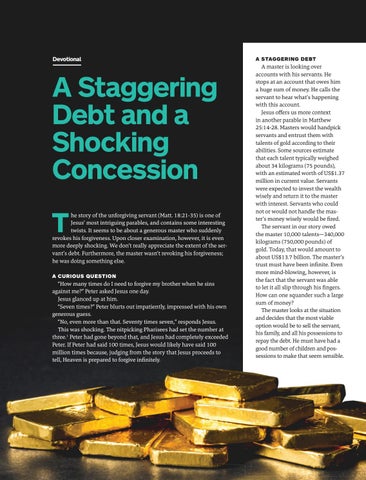 A Staggering Debt and a Shocking Concession

he story of the unforgiving servant (Matt. 18:21-35) is one of Jesus’ most intriguing parables, and contains some interesting twists. It seems to be about a generous master who suddenly revokes his forgiveness. Upon closer examination, however, it is even more deeply shocking. We don’t really appreciate the extent of the servant’s debt. Furthermore, the master wasn’t revoking his forgiveness; he was doing something else. A CURIOUS QUESTION

“How many times do I need to forgive my brother when he sins against me?” Peter asked Jesus one day. Jesus glanced up at him. “Seven times?” Peter blurts out impatiently, impressed with his own generous guess. “No, even more than that. Seventy times seven,” responds Jesus. This was shocking. The nitpicking Pharisees had set the number at three.1 Peter had gone beyond that, and Jesus had completely exceeded Peter. If Peter had said 100 times, Jesus would likely have said 100 million times because, judging from the story that Jesus proceeds to tell, Heaven is prepared to forgive infinitely.

A master is looking over accounts with his servants. He stops at an account that owes him a huge sum of money. He calls the servant to hear what’s happening with this account. Jesus offers us more context in another parable in Matthew 25:14-28. Masters would handpick servants and entrust them with talents of gold according to their abilities. Some sources estimate that each talent typically weighed about 34 kilograms (75 pounds), with an estimated worth of US$1.37 million in current value. Servants were expected to invest the wealth wisely and return it to the master with interest. Servants who could not or would not handle the master’s money wisely would be fired. The servant in our story owed the master 10,000 talents—340,000 kilograms (750,000 pounds) of gold. Today, that would amount to about US$13.7 billion. The master’s trust must have been infinite. Even more mind-blowing, however, is the fact that the servant was able to let it all slip through his fingers. How can one squander such a large sum of money? The master looks at the situation and decides that the most viable option would be to sell the servant, his family, and all his possessions to repay the debt. He must have had a good number of children and possessions to make that seem sensible. 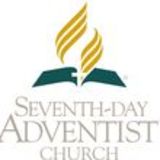