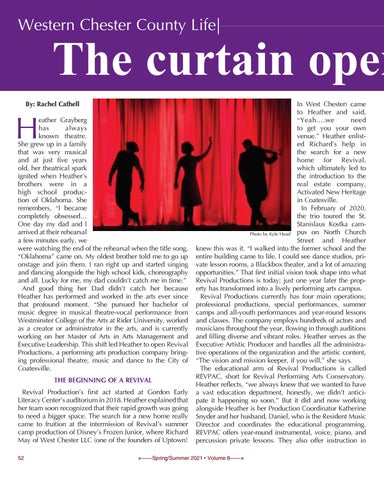 eather Grayberg has always known theatre. She grew up in a family that was very musical and at just five years old, her theatrical spark ignited when Heather’s brothers were in a high school production of Oklahoma. She remembers, “I became completely obsessed… One day my dad and I arrived at their rehearsal a few minutes early, we were watching the end of the rehearsal when the title song, “Oklahoma” came on. My oldest brother told me to go up onstage and join them. I ran right up and started singing and dancing alongside the high school kids, choreography and all. Lucky for me, my dad couldn’t catch me in time.” And good thing her Dad didn’t catch her because Heather has performed and worked in the arts ever since that profound moment. “She pursued her bachelor of music degree in musical theatre-vocal performance from Westminster College of the Arts at Rider University, worked as a creator or administrator in the arts, and is currently working on her Master of Arts in Arts Management and Executive Leadership. This shift led Heather to open Revival Productions, a performing arts production company bringing professional theatre, music and dance to the City of Coatesville. THE BEGINNING OF A REVIVAL Revival Production’s first act started at Gordon Early Literacy Center’s auditorium in 2018. Heather explained that her team soon recognized that their rapid growth was going to need a bigger space. The search for a new home really came to fruition at the intermission of Revival’s summer camp production of Disney’s Frozen Junior, where Richard May of West Chester LLC (one of the founders of Uptown! 52

In West Chester) came to Heather and said, “Yeah....we need to get you your own venue.” Heather enlisted Richard’s help in the search for a new home for Revival, which ultimately led to the introduction to the real estate company, Activated New Heritage in Coatesville. In February of 2020, the trio toured the St. Stanislaus Kostka camPhoto by Kyle Head pus on North Church Street and Heather knew this was it. “I walked into the former school and the entire building came to life. I could see dance studios, private lesson rooms, a Blackbox theater, and a lot of amazing opportunities.” That first initial vision took shape into what Revival Productions is today; just one year later the property has transformed into a lively performing arts campus. Revival Productions currently has four main operations; professional productions, special performances, summer camps and all-youth performances and year-round lessons and classes. The company employs hundreds of actors and musicians throughout the year, flowing in through auditions and filling diverse and vibrant roles. Heather serves as the Executive Artistic Producer and handles all the administrative operations of the organization and the artistic content, “The vision and mission keeper, if you will,” she says. The educational arm of Revival Productions is called REVPAC, short for Revival Performing Arts Conservatory. Heather reflects, “we always knew that we wanted to have a vast education department, honestly, we didn’t anticipate it happening so soon.” But it did and now working alongside Heather is her Production Coordinator Katherine Snyder and her husband, Daniel, who is the Resident Music Director and coordinates the educational programming. REVPAC offers year-round instrumental, voice, piano, and percussion private lessons. They also offer instruction in 2021 • Volume 8——v