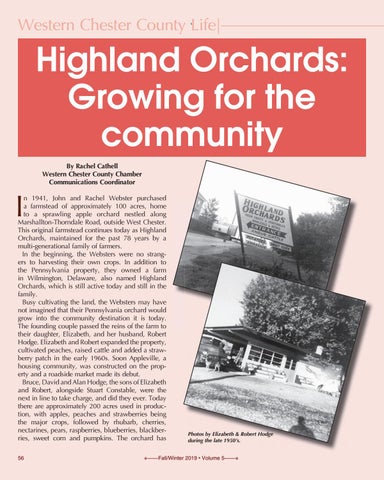 n 1941, John and Rachel Webster purchased a farmstead of approximately 100 acres, home to a sprawling apple orchard nestled along Marshallton-Thorndale Road, outside West Chester. This original farmstead continues today as Highland Orchards, maintained for the past 78 years by a multi-generational family of farmers. In the beginning, the Websters were no strangers to harvesting their own crops. In addition to the Pennsylvania property, they owned a farm in Wilmington, Delaware, also named Highland Orchards, which is still active today and still in the family. Busy cultivating the land, the Websters may have not imagined that their Pennsylvania orchard would grow into the community destination it is today. The founding couple passed the reins of the farm to their daughter, Elizabeth, and her husband, Robert Hodge. Elizabeth and Robert expanded the property, cultivated peaches, raised cattle and added a strawberry patch in the early 1960s. Soon Appleville, a housing community, was constructed on the property and a roadside market made its debut. Bruce, David and Alan Hodge, the sons of Elizabeth and Robert, alongside Stuart Constable, were the next in line to take charge, and did they ever. Today there are approximately 200 acres used in production, with apples, peaches and strawberries being the major crops, followed by rhubarb, cherries, nectarines, pears, raspberries, blueberries, blackberries, sweet corn and pumpkins. The orchard has 56