Jerusalem, one of the world’s oldest and most enchanting cities, attracts more than 3.5 million tourists annually. Visitors are richly rewarded with a unique spiritual experience and a mesmerizing insight into a colorful kaleidoscope of history and culture. With a turbulent past, which continues to this day, Jerusalem is considered to be a sacred site for Jews, Muslims, and Christians alike. Architectural finds unearthed in the area known as the City of David reflect signs of human settlement dating back to the 4th millennium BC. The towering walls surrounding the Old City were initially constructed by the Israelites in the 9th century BC and rebuilt in the 16th century during the reign of Suleiman the Magnificent, the Ottoman Caliph. The Old City, which is divided into Armenian, Jewish, Muslim, and Christian quarters, was recognized as a World Heritage Site in 1981. Jerusalem offers an extensive choice of places to stay. Still, for those seeking a spot of high-end pampering, the luxurious David Citadel Hotel, located on King David Street, is within walking distance to the Old City’s Jaffa Gate entrance, and it’s just the ticket. This property offers the largest bedrooms in Jerusalem, and I was most fortunate to be allocated an elegant junior suite measuring 47 sq meters and featuring a furnished terrace overlooking the Old City. Sumptuously furnished with oak parquet flooring, a chic lounge area, and an ultra-comfortable bed swathed in crisp, white linens, it was the perfect sanctuary. The spacious bathroom, furnished with Carrara marble tiles, includes a large bathtub and separate shower, and for those of us with a penchant for high-end brands, a generous selection of BVLGARI bathing products. Up with the larks the following morning, I headed for Seasons, one of the hotel’s many stylish dining venues, where the extravagant buffet includes a wide variety of delicious slices of 60 | UPSCALE LIVING MAGAZINE | MAY 2020

bread, cakes, fruits and salads, hot dishes and delicious fresh fruit juices. I must admit that I still managed to indulge in two sweet pastries, and to feel a trifle guilty, I made my way to the fabulous outdoor swimming pool. After a few strenuous laps in the 28°C waters, I had every intention of planning my diary for the rest of the day and swiftly succumbed to a mid-morning snooze on a comfortable sun lounger. Guests residing in the hotel’s suites are welcome to take advantage of the lavish executive lounge, which presents hot and cold light dining options throughout the day. I selected a few dainty sandwiches and a scrumptious lemon tart along with a piping hot cup of tea, and then it was time to head outside, and I made my way to the Temple Mount in the southeastern section of the Old City. Known to Muslims as Al-Haram A’ Sharif, Temple Mount is the location for two of Islam’s most sacred places of worship, the Al Aqsa Mosque and the Dome of the Rock. It is also the site of the First and Second Temples, revered by those of the Jewish faith. The view of the exterior of the Dome of the Rock, which features 5000 shimmering gold plates, donated by the late King Hussein of Jordan, is simply unforgettable. This site is revered by Jews as the place where Abraham prepared to sacrifice his son, Isaac, and for Muslims, it is the place where the Prophet Mohammed ascended into Heaven. The nearby Western Wall, which supports the outer section of the Temple Mount, is where the Second Temple once stood. Judaism’s most sacred site for prayer, this is where worshippers recite scriptures, and it is believed that prayers written on small pieces of paper, which are inserted into the cracks between the stones, will take precedence. I then headed back towards the Jaffa Gate entrance to view the spectacular King David

Our May issue focuses on the beauty of Home Interiors; Helene Ramackers was able to sit down with world-renowned architect, Paul McClean, to talk about his early introduction to the world of design, and where he draws his inspirations from; We also had the opportunity to meet Louise Bradley, Interior Designer from the Louise Bradley Design Studio who shared with us the signature elements of her brand interiors and how she is able to create ambiance with all her interiors. The SPIRO is a high-resolution player piano that brings the world's pianist performance right to your living room at your finger-tips. Take a look at glamorous furnishings that will have to add an elegant touch to any interior. The newest 2020 BAC Mono Sports Car will be the perfect toy for a pure driving experience, and if you are interested in owning one, get ready to place your order! The $121,177 price tag is well worth it. Take a look at our May issue, fashion, jewelry, hotels, delectable recipes, and perfect wines. You'll love it! 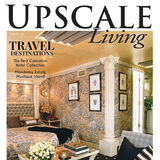