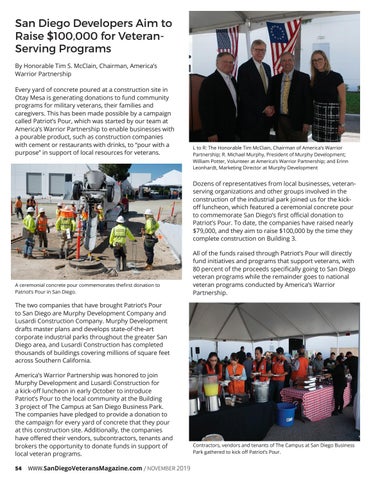 San Diego Developers Aim to Raise $100,000 for VeteranServing Programs By Honorable Tim S. McClain, Chairman, America’s Warrior Partnership Every yard of concrete poured at a construction site in Otay Mesa is generating donations to fund community programs for military veterans, their families and caregivers. This has been made possible by a campaign called Patriot’s Pour, which was started by our team at America’s Warrior Partnership to enable businesses with a pourable product, such as construction companies with cement or restaurants with drinks, to “pour with a purpose” in support of local resources for veterans.

Dozens of representatives from local businesses, veteranserving organizations and other groups involved in the construction of the industrial park joined us for the kickoff luncheon, which featured a ceremonial concrete pour to commemorate San Diego’s first official donation to Patriot’s Pour. To date, the companies have raised nearly $79,000, and they aim to raise $100,000 by the time they complete construction on Building 3.

All of the funds raised through Patriot’s Pour will directly fund initiatives and programs that support veterans, with 80 percent of the proceeds specifically going to San Diego veteran programs while the remainder goes to national veteran programs conducted by America’s Warrior Partnership.

The two companies that have brought Patriot’s Pour to San Diego are Murphy Development Company and Lusardi Construction Company. Murphy Development drafts master plans and develops state-of-the-art corporate industrial parks throughout the greater San Diego area, and Lusardi Construction has completed thousands of buildings covering millions of square feet across Southern California. America’s Warrior Partnership was honored to join Murphy Development and Lusardi Construction for a kick-off luncheon in early October to introduce Patriot’s Pour to the local community at the Building 3 project of The Campus at San Diego Business Park. The companies have pledged to provide a donation to the campaign for every yard of concrete that they pour at this construction site. Additionally, the companies have offered their vendors, subcontractors, tenants and brokers the opportunity to donate funds in support of local veteran programs. 54

Contractors, vendors and tenants of The Campus at San Diego Business Park gathered to kick off Patriot’s Pour.