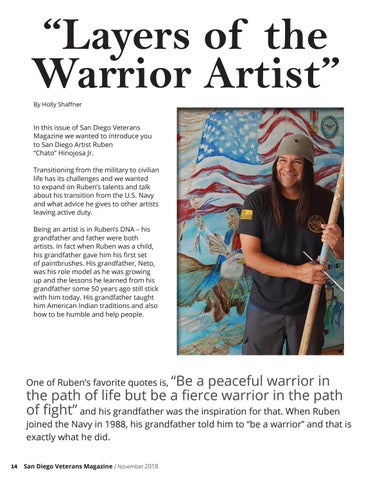 “Layers of the Warrior Artist” By Holly Shaffner

In this issue of San Diego Veterans Magazine we wanted to introduce you to San Diego Artist Ruben “Chato” Hinojosa Jr. Transitioning from the military to civilian life has its challenges and we wanted to expand on Ruben’s talents and talk about his transition from the U.S. Navy and what advice he gives to other artists leaving active duty. Being an artist is in Ruben’s DNA – his grandfather and father were both artists. In fact when Ruben was a child, his grandfather gave him his first set of paintbrushes. His grandfather, Neto, was his role model as he was growing up and the lessons he learned from his grandfather some 50 years ago still stick with him today. His grandfather taught him American Indian traditions and also how to be humble and help people. Military Art

One of Ruben’s favorite quotes is, “Be

joined the Navy in 1988, his grandfather told him to “be a warrior” and that is exactly what he did. 14