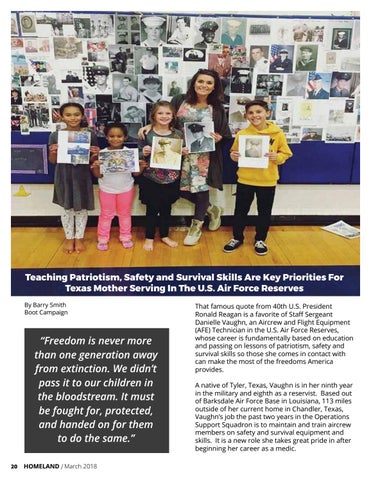 “Freedom is never more than one generation away from extinction. We didn’t pass it to our children in the bloodstream. It must be fought for, protected, and handed on for them to do the same.” 20

That famous quote from 40th U.S. President Ronald Reagan is a favorite of Staff Sergeant Danielle Vaughn, an Aircrew and Flight Equipment (AFE) Technician in the U.S. Air Force Reserves, whose career is fundamentally based on education and passing on lessons of patriotism, safety and survival skills so those she comes in contact with can make the most of the freedoms America provides. A native of Tyler, Texas, Vaughn is in her ninth year in the military and eighth as a reservist. Based out of Barksdale Air Force Base in Louisiana, 113 miles outside of her current home in Chandler, Texas, Vaughn’s job the past two years in the Operations Support Squadron is to maintain and train aircrew members on safety and survival equipment and skills. It is a new role she takes great pride in after beginning her career as a medic.

www.HomelandMagazine.com Reaching veterans, active military, and the families that keep it together 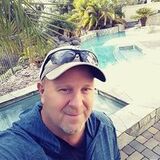