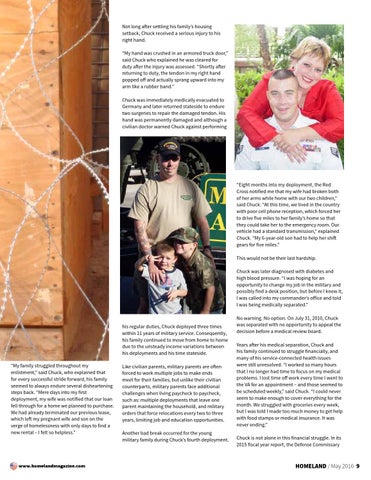 Not long after settling his family’s housing setback, Chuck received a serious injury to his right hand. “My hand was crushed in an armored truck door,” said Chuck who explained he was cleared for duty after the injury was assessed. “Shortly after returning to duty, the tendon in my right hand popped off and actually sprang upward into my arm like a rubber band.” Chuck was immediately medically evacuated to Germany and later returned stateside to endure two surgeries to repair the damaged tendon. His hand was permanently damaged and although a civilian doctor warned Chuck against performing

“Eight months into my deployment, the Red Cross notified me that my wife had broken both of her arms while home with our two children,” said Chuck. “At this time, we lived in the country with poor cell phone reception, which forced her to drive five miles to her family’s home so that they could take her to the emergency room. Our vehicle had a standard transmission,” explained Chuck. “My 6-year-old son had to help her shift gears for five miles.” This would not be their last hardship. Chuck was later diagnosed with diabetes and high blood pressure. “I was hoping for an opportunity to change my job in the military and possibly find a desk position, but before I knew it, I was called into my commander’s office and told I was being medically separated.”

This is his story. “My family struggled throughout my enlistment,” said Chuck, who explained that for every successful stride forward, his family seemed to always endure several disheartening steps back. “Mere days into my first deployment, my wife was notified that our loan fell through for a home we planned to purchase. We had already terminated our previous lease, which left my pregnant wife and son on the verge of homelessness with only days to find a new rental – I felt so helpless.”

his regular duties, Chuck deployed three times within 11 years of military service. Consequently, his family continued to move from home to home due to the unsteady income variations between his deployments and his time stateside. Like civilian parents, military parents are often forced to work multiple jobs to make ends meet for their families, but unlike their civilian counterparts, military parents face additional challenges when living paycheck to paycheck, such as: multiple deployments that leave one parent maintaining the household, and military orders that force relocations every two to three years, limiting job and education opportunities. Another bad break occurred for the young military family during Chuck’s fourth deployment.

No warning. No option. On July 31, 2010, Chuck was separated with no opportunity to appeal the decision before a medical review board. Years after his medical separation, Chuck and his family continued to struggle financially, and many of his service-connected health issues were still unresolved. “I worked so many hours that I no longer had time to focus on my medical problems. I lost time off work every time I went to the VA for an appointment – and those seemed to be scheduled weekly,” said Chuck. “I could never seem to make enough to cover everything for the month. We struggled with groceries every week, but I was told I made too much money to get help with food stamps or medical insurance. It was never ending.” Chuck is not alone in this financial struggle. In its 2015 fiscal year report, the Defense Commissary