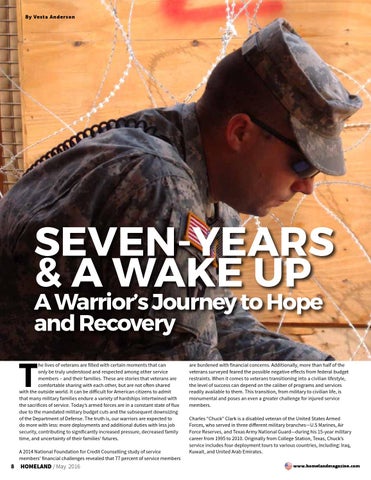 By Vesta Anderson BY KEITH ANGELIN

he lives of veterans are filled with certain moments that can only be truly understood and respected among other service members – and their families. These are stories that veterans are comfortable sharing with each other, but are not often shared with the outside world. It can be difficult for American citizens to admit that many military families endure a variety of hardships intertwined with the sacrifices of service. Today’s armed forces are in a constant state of flux due to the mandated military budget cuts and the subsequent downsizing of the Department of Defense. The truth is, our warriors are expected to do more with less: more deployments and additional duties with less job security, contributing to significantly increased pressure, decreased family time, and uncertainty of their families’ futures. A 2014 National Foundation for Credit Counselling study of service members’ financial challenges revealed that 77 percent of service members

are burdened with financial concerns. Additionally, more than half of the veterans surveyed feared the possible negative effects from federal budget restraints. When it comes to veterans transitioning into a civilian lifestyle, the level of success can depend on the caliber of programs and services readily available to them. This transition, from military to civilian life, is monumental and poses an even a greater challenge for injured service members. Charles “Chuck” Clark is a disabled veteran of the United States Armed Forces, who served in three different military branches—U.S Marines, Air Force Reserves, and Texas Army National Guard—during his 15-year military career from 1995 to 2010. Originally from College Station, Texas, Chuck’s service includes four deployment tours to various countries, including: Iraq, Kuwait, and United Arab Emirates. www.homelandmagazine.com