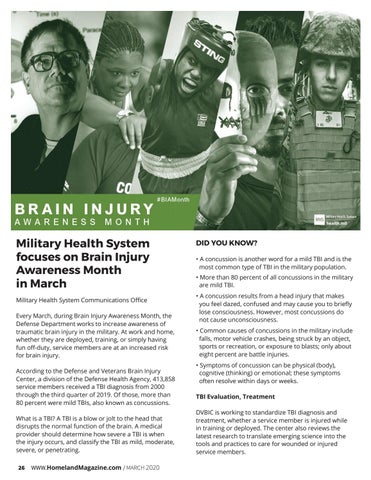 Military Health System focuses on Brain Injury Awareness Month in March Military Health System Communications Office Every March, during Brain Injury Awareness Month, the Defense Department works to increase awareness of traumatic brain injury in the military. At work and home, whether they are deployed, training, or simply having fun off-duty, service members are at an increased risk for brain injury. According to the Defense and Veterans Brain Injury Center, a division of the Defense Health Agency, 413,858 service members received a TBI diagnosis from 2000 through the third quarter of 2019. Of those, more than 80 percent were mild TBIs, also known as concussions. What is a TBI? A TBI is a blow or jolt to the head that disrupts the normal function of the brain. A medical provider should determine how severe a TBI is when the injury occurs, and classify the TBI as mild, moderate, severe, or penetrating. 26

DID YOU KNOW? • A concussion is another word for a mild TBI and is the most common type of TBI in the military population. • More than 80 percent of all concussions in the military are mild TBI. • A concussion results from a head injury that makes you feel dazed, confused and may cause you to briefly lose consciousness. However, most concussions do not cause unconsciousness. • Common causes of concussions in the military include falls, motor vehicle crashes, being struck by an object, sports or recreation, or exposure to blasts; only about eight percent are battle injuries. • Symptoms of concussion can be physical (body), cognitive (thinking) or emotional; these symptoms often resolve within days or weeks. TBI Evaluation, Treatment DVBIC is working to standardize TBI diagnosis and treatment, whether a service member is injured while in training or deployed. The center also reviews the latest research to translate emerging science into the tools and practices to care for wounded or injured service members.