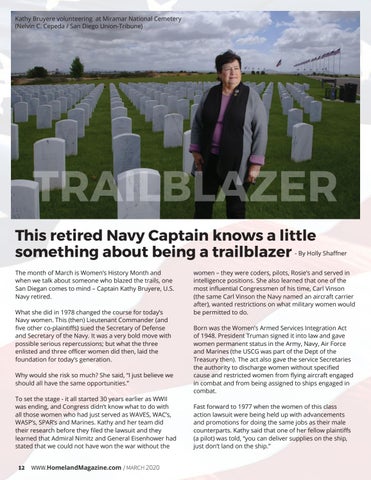 The month of March is Women’s History Month and when we talk about someone who blazed the trails, one San Diegan comes to mind – Captain Kathy Bruyere, U.S. Navy retired. What she did in 1978 changed the course for today’s Navy women. This (then) Lieutenant Commander (and five other co-plaintiffs) sued the Secretary of Defense and Secretary of the Navy. It was a very bold move with possible serious repercussions; but what the three enlisted and three officer women did then, laid the foundation for today’s generation. Why would she risk so much? She said, “I just believe we should all have the same opportunities.” To set the stage - it all started 30 years earlier as WWII was ending, and Congress didn’t know what to do with all those women who had just served as WAVES, WAC’s, WASP’s, SPAR’s and Marines. Kathy and her team did their research before they filed the lawsuit and they learned that Admiral Nimitz and General Eisenhower had stated that we could not have won the war without the 12

women – they were coders, pilots, Rosie’s and served in intelligence positions. She also learned that one of the most influential Congressmen of his time, Carl Vinson (the same Carl Vinson the Navy named an aircraft carrier after), wanted restrictions on what military women would be permitted to do. Born was the Women’s Armed Services Integration Act of 1948. President Truman signed it into law and gave women permanent status in the Army, Navy, Air Force and Marines (the USCG was part of the Dept of the Treasury then). The act also gave the service Secretaries the authority to discharge women without specified cause and restricted women from flying aircraft engaged in combat and from being assigned to ships engaged in combat. Fast forward to 1977 when the women of this class action lawsuit were being held up with advancements and promotions for doing the same jobs as their male counterparts. Kathy said that one of her fellow plaintiffs (a pilot) was told, “you can deliver supplies on the ship, just don’t land on the ship.”