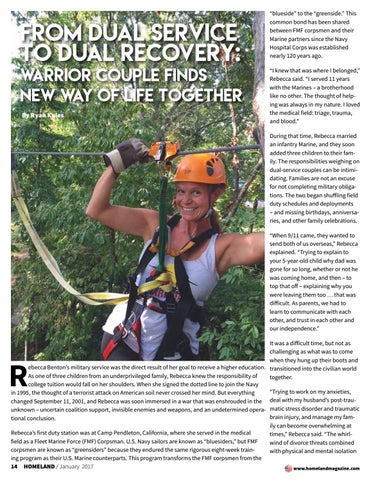 From Dual Service to Dual Recovery:

“blueside” to the “greenside.” This common bond has been shared between FMF corpsmen and their Marine partners since the Navy Hospital Corps was established nearly 120 years ago. “I knew that was where I belonged,” Rebecca said. “I served 11 years with the Marines – a brotherhood like no other. The thought of helping was always in my nature. I loved the medical field: triage, trauma, and blood.” During that time, Rebecca married an infantry Marine, and they soon added three children to their family. The responsibilities weighing on dual-service couples can be intimidating. Families are not an excuse for not completing military obligations. The two began shuffling field duty schedules and deployments – and missing birthdays, anniversaries, and other family celebrations. “When 9/11 came, they wanted to send both of us overseas,” Rebecca explained. “Trying to explain to your 5-year-old child why dad was gone for so long, whether or not he was coming home, and then – to top that off – explaining why you were leaving them too … that was difficult. As parents, we had to learn to communicate with each other, and trust in each other and our independence.”

It was a difficult time, but not as challenging as what was to come when they hung up their boots and ebecca Benton’s military service was the direct result of her goal to receive a higher education. transitioned into the civilian world As one of three children from an underprivileged family, Rebecca knew the responsibility of together. college tuition would fall on her shoulders. When she signed the dotted line to join the Navy “Trying to work on my anxieties, in 1995, the thought of a terrorist attack on American soil never crossed her mind. But everything changed September 11, 2001, and Rebecca was soon immersed in a war that was enshrouded in the deal with my husband’s post-trauunknown – uncertain coalition support, invisible enemies and weapons, and an undetermined opera- matic stress disorder and traumatic brain injury, and manage my famtional conclusion. ily can become overwhelming at Rebecca’s first duty station was at Camp Pendleton, California, where she served in the medical times,” Rebecca said. “The whirlfield as a Fleet Marine Force (FMF) Corpsman. U.S. Navy sailors are known as “bluesiders,” but FMF wind of divorce threats combined corpsmen are known as “greensiders” because they endured the same rigorous eight-week trainwith physical and mental isolation ing program as their U.S. Marine counterparts. This program transforms the FMF corpsmen from the 14 HOMELAND / January 2017 www.homelandmagazine.com