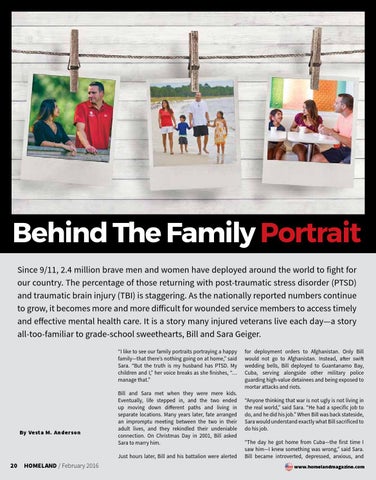 Behind The Family Portrait Since 9/11, 2.4 million brave men and women have deployed around the world to fight for our country. The percentage of those returning with post-traumatic stress disorder (PTSD) and traumatic brain injury (TBI) is staggering. As the nationally reported numbers continue to grow, it becomes more and more difficult for wounded service members to access timely and effective mental health care. It is a story many injured veterans live each day—a story all-too-familiar to grade-school sweethearts, Bill and Sara Geiger. “I like to see our family portraits portraying a happy family—that there’s nothing going on at home,” said Sara. “But the truth is my husband has PTSD. My children and I,” her voice breaks as she finishes, “… manage that.”

Bill and Sara met when they were mere kids. Eventually, life stepped in, and the two ended up moving down different paths and living in separate locations. Many years later, fate arranged an impromptu meeting between the two in their adult lives, and they rekindled their undeniable connection. On Christmas Day in 2001, Bill asked Sara to marry him. Just hours later, Bill and his battalion were alerted

for deployment orders to Afghanistan. Only Bill would not go to Afghanistan. Instead, after swift wedding bells, Bill deployed to Guantanamo Bay, Cuba, serving alongside other military police guarding high-value detainees and being exposed to mortar attacks and riots. “Anyone thinking that war is not ugly is not living in the real world,” said Sara. “He had a specific job to do, and he did his job.” When Bill was back stateside, Sara would understand exactly what Bill sacrificed to do his job. “The day he got home from Cuba—the first time I saw him—I knew something was wrong,” said Sara. Bill became introverted, depressed, anxious, and www.homelandmagazine.com