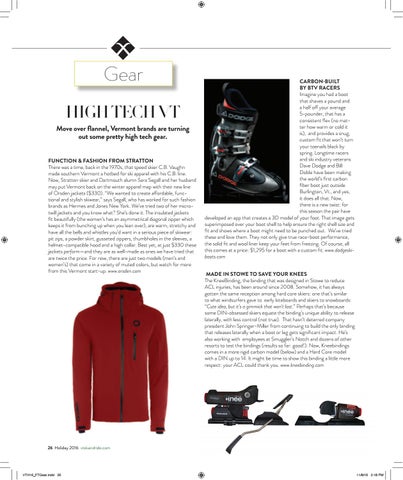 Gear HIGH TECH VT Move over flannel, Vermont brands are turning out some pretty high tech gear. FUNCTION &amp; FASHION FROM STRATTON There was a time, back in the 1970s, that speed skier C.B. Vaughn made southern Vermont a hotbed for ski apparel with his C.B. line. Now, Stratton skier and Dartmouth alumn Sara Segall and her husband may put Vermont back on the winter apparel map with their new line of Orsden jackets ($330). “We wanted to create affordable, functional and stylish skiwear,” says Segall, who has worked for such fashion brands as Hermes and Jones New York. We’ve tried two of her microtwill jackets and you know what? She’s done it. The insulated jackets fit beautifully (the women’s has an asymmetrical diagonal zipper which keeps it from bunching up when you lean over), are warm, stretchy and have all the bells and whistles you’d want in a serious piece of skiwear: pit zips, a powder skirt, gusseted zippers, thumbholes in the sleeves, a helmet-compatible hood and a high collar. Best yet, at just $330 these jackets perform—and they are as well-made as ones we have tried that are twice the price. For now, there are just two models (men’s and women’s) that come in a variety of muted colors, but watch for more from this Vermont start-up. www.orsden.com

CARBON-BUILT BY BTV RACERS Imagine you had a boot that shaves a pound and a half off your average 5-pounder, that has a consistent flex (no matter how warm or cold it is), and provides a snug, custom fit that won’t turn your toenails black by spring. Longtime racers and ski industry veterans Dave Dodge and Bill Doble have been making the world’s first carbon fiber boot just outside Burlington, Vt., and yes, it does all that. Now, there is a new twist: for this season the pair have developed an app that creates a 3D model of your foot. That image gets superimposed over your boot shell to help ensure the right shell size and fit and shows where a boot might need to be punched out. We’ve tried these and love them. They not only give true race-boot performance, the solid fit and wool liner keep your feet from freezing. Of course, all this comes at a price: $1,295 for a boot with a custom fit. www.dodgeskiboots.com MADE IN STOWE TO SAVE YOUR KNEES The KneeBinding, the binding that was designed in Stowe to reduce ACL injuries, has been around since 2008. Somehow, it has always gotten the same reception among hard core skiers: one that’s similar to what windsurfers gave to early kiteboards and skiers to snowboards: “Cute idea, but it’s a gimmick that won’t last.” Perhaps that’s because some DIN-obsessed skiers equate the binding’s unique ability to release laterally, with less control (not true). That hasn’t deterred company president John Springer-Miller from continuing to build the only binding that releases laterally when a boot or leg gets significant impact. He’s also working with employees at Smuggler’s Notch and dozens of other resorts to test the bindings (results so far: good!). Now, Kneebindings comes in a more rigid carbon model (below) and a Hard Core model with a DIN up to 14. It might be time to show this binding a little more respect: your ACL could thank you. www.kneebinding.com

Vermont's Mountain Sports & Life Magazine. The Holiday 2017 issue features the best of what's new in apres ski spots around the state, a Stratton freeskier's dream home, how to carve like pro and great made-in-Vermont holiday gifts. 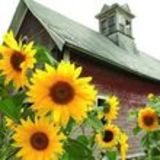