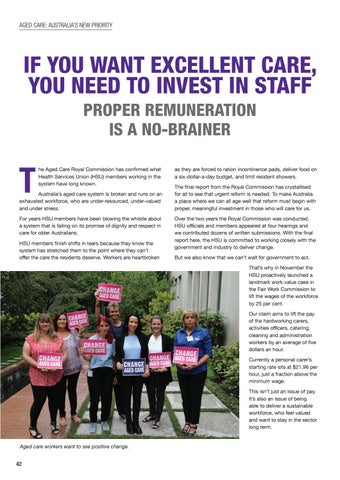 IF YOU WANT EXCELLENT CARE, YOU NEED TO INVEST IN STAFF PROPER REMUNERATION IS A NO-BRAINER

he Aged Care Royal Commission has confirmed what Health Services Union (HSU) members working in the system have long known.

Australia’s aged care system is broken and runs on an exhausted workforce, who are under-resourced, under‑valued and under stress. For years HSU members have been blowing the whistle about a system that is failing on its promise of dignity and respect in care for older Australians. HSU members finish shifts in tears because they know the system has stretched them to the point where they can’t offer the care the residents deserve. Workers are heartbroken

as they are forced to ration incontinence pads, deliver food on a six-dollar-a-day budget, and limit resident showers. The final report from the Royal Commission has crystallised for all to see that urgent reform is needed. To make Australia a place where we can all age well that reform must begin with proper, meaningful investment in those who will care for us. Over the two years the Royal Commission was conducted, HSU officials and members appeared at four hearings and we contributed dozens of written submissions. With the final report here, the HSU is committed to working closely with the government and industry to deliver change. But we also know that we can’t wait for government to act. That’s why in November the HSU proactively launched a landmark work value case in the Fair Work Commission to lift the wages of the workforce by 25 per cent. Our claim aims to lift the pay of the hardworking carers, activities officers, catering, cleaning and administration workers by an average of five dollars an hour. Currently a personal carer’s starting rate sits at $21.96 per hour, just a fraction above the minimum wage. This isn’t just an issue of pay. It’s also an issue of being able to deliver a sustainable workforce, who feel valued and want to stay in the sector long term. 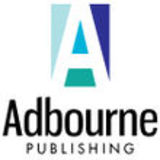