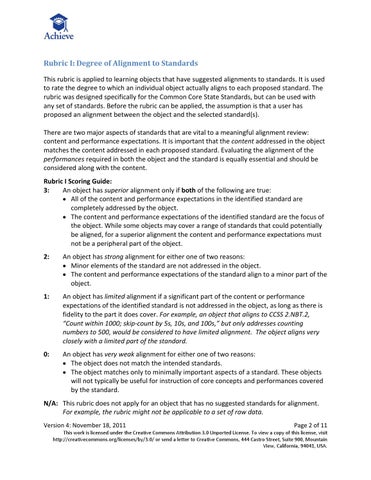 An object has limited alignment if a significant part of the content or performance expectations of the identified standard is not addressed in the object, as long as there is fidelity to the part it does cover. For example, an object that aligns to CCSS 2.NBT.2, “Count within 1000; skip-count by 5s, 10s, and 100s,” but only addresses counting numbers to 500, would be considered to have limited alignment. The object aligns very closely with a limited part of the standard.

An object has very weak alignment for either one of two reasons:  The object does not match the intended standards.  The object matches only to minimally important aspects of a standard. These objects will not typically be useful for instruction of core concepts and performances covered by the standard.

N/A: This rubric does not apply for an object that has no suggested standards for alignment. For example, the rubric might not be applicable to a set of raw data. Version 4: November 18, 2011

This work is licensed under the Creative Commons Attribution 3.0 Unported License. To view a copy of this license, visit http://creativecommons.org/licenses/by/3.0/ or send a letter to Creative Commons, 444 Castro Street, Suite 900, Mountain View, California, 94041, USA.

To help states, districts, teachers, and other users determine the degree of alignment of Open Educational Resources (OERs) to the Common Core State Standards, and to determine aspects of quality of OERs, Achieve has developed eight rubrics in collaboration with leaders from the OER community. To allow users to apply these rubrics and evaluate the quality of instructional resources, Achieve partnered with OER Commons to develop an online evaluation tool. OER Commons, an online repository for open education resources, is now hosting the tool and its resulting evaluation data. Every resource available on OER Commons contains an "Evaluate Resource" button that will direct users to the evaluation tool. The coding for the tool is freely available online here. Resources rated on OER Commons will create a pool of metadata, and this metadata will be shared through the Learning Registry with other interested repositories. Visit http://www.achieve.org 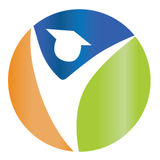