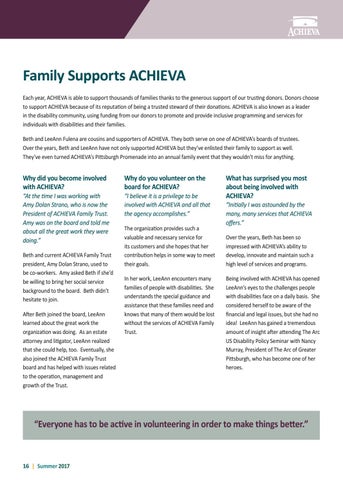 Family Supports ACHIEVA Each year, ACHIEVA is able to support thousands of families thanks to the generous support of our trusting donors. Donors choose to support ACHIEVA because of its reputation of being a trusted steward of their donations. ACHIEVA is also known as a leader in the disability community, using funding from our donors to promote and provide inclusive programming and services for individuals with disabilities and their families. Beth and LeeAnn Fulena are cousins and supporters of ACHIEVA. They both serve on one of ACHIEVA’s boards of trustees. Over the years, Beth and LeeAnn have not only supported ACHIEVA but they’ve enlisted their family to support as well. They’ve even turned ACHIEVA’s Pittsburgh Promenade into an annual family event that they wouldn’t miss for anything.

Why did you become involved with ACHIEVA?

“At the time I was working with Amy Dolan Strano, who is now the President of ACHIEVA Family Trust. Amy was on the board and told me about all the great work they were doing.” Beth and current ACHIEVA Family Trust president, Amy Dolan Strano, used to be co-workers. Amy asked Beth if she’d be willing to bring her social service background to the board. Beth didn’t hesitate to join. After Beth joined the board, LeeAnn learned about the great work the organization was doing. As an estate attorney and litigator, LeeAnn realized that she could help, too. Eventually, she also joined the ACHIEVA Family Trust board and has helped with issues related to the operation, management and growth of the Trust.

Why do you volunteer on the board for ACHIEVA?

“I believe it is a privilege to be involved with ACHIEVA and all that the agency accomplishes.” The organization provides such a valuable and necessary service for its customers and she hopes that her contribution helps in some way to meet their goals. In her work, LeeAnn encounters many families of people with disabilities. She understands the special guidance and assistance that these families need and knows that many of them would be lost without the services of ACHIEVA Family Trust.

What has surprised you most about being involved with ACHIEVA?

“Initially I was astounded by the many, many services that ACHIEVA offers.” Over the years, Beth has been so impressed with ACHIEVA’s ability to develop, innovate and maintain such a high level of services and programs. Being involved with ACHIEVA has opened LeeAnn’s eyes to the challenges people with disabilities face on a daily basis. She considered herself to be aware of the financial and legal issues, but she had no idea! LeeAnn has gained a tremendous amount of insight after attending The Arc US Disability Policy Seminar with Nancy Murray, President of The Arc of Greater Pittsburgh, who has become one of her heroes.

“Everyone has to be active in volunteering in order to make things better.” 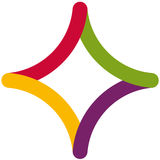