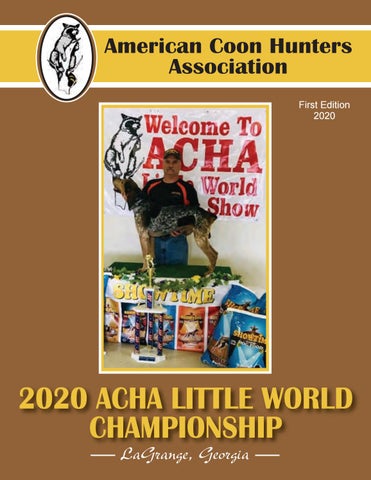 For sure things are crazy in the world today. I definitely have opinions about some of these things happening in the world and I’m not too shy to share them but I will attempt to keep on subject. How many times do we see or hear about something terrible that happens to people but because we don’t actually know them it doesn’t have as big an impact on us? About a year ago something happened to one of my dear friends. It could have very easily turned up on the evening news as a senseless tragedy that happened to a family. I have been wanting to write about it some but kept on delaying it. Right now as I write this, fires are burning in many parts of the country. We had snow where I live, about 6” on September 8th into the 9th. Riots are going on in different parts of the country. I have never seen this country so divided on so many important issues. AMERICAN Coon Hunters Association was formed many years ago by people who had common beliefs in things but also different opinions about things as well. If you get a bunch of Black &amp; Tan, Bluetick, English, Plott, Redbone, and Treeing Walker people together you know there is going to be different opinions about what breed is better. But with those differences put aside a group of people who loved their country and loved their sport of coonhunting

who liked different breeds of hounds and we had to come together to come up with rules and ways to hold these new type of events. Back then most only had trucks if they had a farm. Most didn’t have two or three vehicles and if you were taking your hound somewhere he would be in the trunk or backseat. For sure there wasn’t tracking devices or GPS or even shocking collars. But there were many things that united these people. Love of country, freedom, hounds, coon hunting, competition of who had the best, and talking and telling stories about all of this.

Magill’s Jungle Jim and Brooks Magill, ACHA’s first president. Back in the day if you had a Redbone there was a good chance he was in the pedigree.

came together to form an association that would become a large diverse family. It wasn’t easy when it was started. Unlike now, when everyone has a phone and so many ways to communicate, back then communication wasn’t so simple. Many didn’t even have phones. A lot of times when they were able to get phone service it would be a party-line. If you have never experienced a party-line you have no idea of the meaning of true frustration. Most communication was done by letter. Unlike today when we can email or text someone and get immediate response, back then you had to mail the letter, it would take the person a few days to get it, then write a reply and mail it back. If all of this had happened in 9 or 10 days I would say that would have been fast. So then we had all these people

For the longest time the ACHA World Championship was held in early October. A great time of the year for sure. Nice comfortable days and a little bit of chill at night. Many took the week of the ACHA World Hunt as their vacation. Many took their family. It is easy to see how it became a large type of family event and gathering. It is also easy to see how it brought so many different people from so many different parts of the country together as a family of people connected by their love for many of the same things.

The Legends of ACHA THE FAMILY OF ACHA PART ONE (Continued) Since it seems like forever, people who don’t understand our passion for things in our sport of hounds and hunting have worked to make us go away. Most of these would be scared to death of guns. Why? Because they aren’t familiar with them, where as most of us remember the thrill of getting our first gun, probably a single shot 22 rifle. We were taught it wasn’t a toy and the need to remember that and practice good safety habits. What I remember: People trying to stop all of the big game hunting in the west. Bear, mountain lion, etc. Well it didn’t effect most of us much, but people were saying once they take them out they will be coming for us. People coming after Field Trial events, coon on a log, water races, treeing contests. We even had a coon sacking contest at our club. We had our events at a sale barn. So in the ring we had teams of two people trying to put a live coon in a sack. We never had a coon injured but I can’t say the same for some of the teams trying to bag that coon. People are still coming after our sport in many ways. Some places are making it hard to raise a few litters of pups. I know it is based on puppy farms, but some of this legislation in states makes raising pups evil. Now with so much building and expansion in so many states it is even hard to find a safe place to be able to turn our hounds loose. The passion is still there for our sport but it is becoming harder and harder to practice it in some parts

of the country. I guess all this together helps bring us together as a big diverse family. No matter our differences we have a love and passion for many of the same things. And through the years of attending the ACHA World Championship have become a true family, maybe not in blood but by spirit.

challenge hunts were in our sport and the magazines Mr. Moore had challenged James Merchant to a hunt. James has just passed recently but for sure he became a legend of ACHA with Merchant’s Bawlie and also owning other ACHA World Champions.

I took my son who was 4 years old to his first ACHA World Hunt in 2013. Please let me share some of my experiences at that hunt. You couldn’t have asked for better weather. The days were perfect. Comfortable where you were glad to be outside. Then the nights had a little nip to it. Still comfortable but you would be glad to have a light jacket. At 4-1/2 years of age the most important things are puppies and playing. Well there was puppies for sure and every chance he got he would make it to a pen of puppies. I assume the club was Bennie Moore’s old home club. Loving the history of the sport I thought that was neat. There was a section in the clubhouse that had old magazines. Bennie Moore’s name was on the labels.

Bennie was a big promoter of the Plott breed. I remember back when

At the club we met Shelby Walls. Not related that I know but my mother’s maiden name was Walls, so who knows. Anyway Shelby was one of the sweetest people I have met. She took the 4-1/2 year old in and played with him and some other little friends she had charge of. She helped make his experience a great one.

James Merchant and Bawlie. One of the Legends of ACHA, Coon Hunting &amp; the Treeing Walkers.

People were so great in helping make his first experience at an ACHA World Hunt a great experience. John J., as I call him, took him in and made him feel special. Another Legend of ACHA is John J. Monroe, who won the World Hunt the first time in 1965 with Finley River Spot. He then bought Finley River Chief and the rest is history. John even gave Cooper a special knife for when he got older.

The Legends of ACHA THE FAMILY OF ACHA PART ONE (Continued)

These were some of my personal experiences that just confirmed what I had heard for so long. I will finish this next month. But if you have never been to an ACHA World Championship please consider to do so and experience something special. The ACHA World Championship is the hunt that made dogs and people famous. Many of the Legends in our sport were introduced to the world by winning or placing in the ACHA World Hunt.

ACHA yearly dues are just $15.00 a year. You can send them to or contact the ACHA at: ACHA,

P.O. Box 543, Dickson, TN 37056, Phone: 615-973-9201. Email: americancoonhunters@gmail.com You can also visit their website at www.worldhunt.org. Please send them your dues to help support the hunt and organization that made people and dogs famous. The email address to send me anything is below my name and dedicated for information to use in this column, it is not for ACHA business. Saving The Past For The Future See You Next Month

Then my friend Roger Prater made sure Cooper got to help him in showing his hound Paton. The next year at the ACHA World Hunt the person that won the treeing contest letting Cooper help him handle the dog. At that same hunt Bryan Whitted had an interaction with Cooper. I don’t remember exactly what the 5-1/2 year old said but Bryan was so good with him.

Doesn’t made a difference what color the pups are as long as they are pups.

New friends made at the World Hunt.

I know a lot of this is personal but so many others through the years have had the same type of experiences I have had and this is what gives ACHA the deserved reputation of being family friendly.

ACHA always tries to make the kiddos feel like a part of things.

When there aren’t pups to visit, there is always a baby to talk to.

Your One Stop Print Shop! Need custom printed items featuring your Association, Kennel or Club? GIVE US A CALL.. WE CAN HELP! Letterheads Envelopes Brochures Invitations Invoices Magazines Labels Books

TRIPLE B TRUCKING SAND T L A H P AS

A.C.H.A. - WHERE IT ALL STARTED The Hunt That Made Men &amp; Hounds Famous

WHERE HISTORY IS SAVED finleyriverchief.forumotion.net

Proud Supporter of the

SEE US FOR ALL YOUR EMBROIDERY NEEDS... Hats • Shirts • Jackets • And More!

This December 2020 edition of the American Coon Hunters Association magazine will re-introduce many of you to the history and heritage of the oldest coon hunting association on the planet.