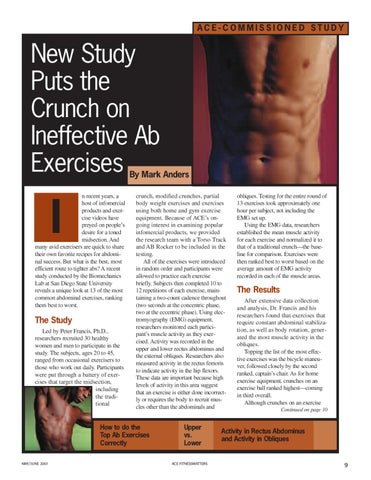 n recent years, a host of infomercial products and exercise videos have preyed on people’s desire for a toned midsection. And many avid exercisers are quick to share their own favorite recipes for abdominal success. But what is the best, most efficient route to tighter abs? A recent study conducted by the Biomechanics Lab at San Diego State University reveals a unique look at 13 of the most common abdominal exercises, ranking them best to worst.

The Study Led by Peter Francis, Ph.D., researchers recruited 30 healthy women and men to participate in the study. The subjects, ages 20 to 45, ranged from occasional exercisers to those who work out daily. Participants were put through a battery of exercises that target the midsection, including the traditional

crunch, modified crunches, partial body weight exercises and exercises using both home and gym exercise equipment. Because of ACE’s ongoing interest in examining popular infomercial products, we provided the research team with a Torso Track and AB Rocker to be included in the testing. All of the exercises were introduced in random order and participants were allowed to practice each exercise briefly. Subjects then completed 10 to 12 repetitions of each exercise, maintaining a two-count cadence throughout (two seconds at the concentric phase, two at the eccentric phase). Using electromyography (EMG) equipment, researchers monitored each participant’s muscle activity as they exercised. Activity was recorded in the upper and lower rectus abdominus and the external obliques. Researchers also measured activity in the rectus femoris to indicate activity in the hip flexors. These data are important because high levels of activity in this area suggest that an exercise is either done incorrectly or requires the body to recruit muscles other than the abdominals and

How to do the Top Ab Exercises Correctly

obliques. Testing for the entire round of 13 exercises took approximately one hour per subject, not including the EMG set up. Using the EMG data, researchers established the mean muscle activity for each exercise and normalized it to that of a traditional crunch—the baseline for comparison. Exercises were then ranked best to worst based on the average amount of EMG activity recorded in each of the muscle areas.

The Results After extensive data collection and analysis, Dr. Francis and his researchers found that exercises that require constant abdominal stabilization, as well as body rotation, generated the most muscle activity in the obliques. Topping the list of the most effective exercises was the bicycle maneuver, followed closely by the second ranked, captain’s chair. As for home exercise equipment, crunches on an exercise ball ranked highest—coming in third overall. Although crunches on an exercise Continued on page 10

ball generated less activity in the obliques and rectus abdominus than the top two exercises, the exercise also generated significantly less activity in the rectus femoris—making it, arguably, the best overall exercise of the lot. Not all of the variations of the crunch fared so well. Both the long arm crunch and the crunch with heel push were shown to be only slightly more effective than the traditional crunch. As for the equipment ACE provided, the Torso Track appeared to be marginally more effective than the traditional crunch. However, this training benefit is likely offset by the lower-back discomfort reported by a significant number of subjects while using the Torso Track. The Ab Roller was proven to be virtually no more effective than the traditional crunch while the AB Rocker was shown to be up to 80 percent less effective. This begs the question, why spend $150 on a piece of exercise equipment that does less to work your abs than a crunch? These results are consistent with the findings of ACE’s 1997 study of popular ab exercise products.

The Bottom Line Many of the exercises tested proved to be relatively effective at working the abdominal muscles—some are just more effective than others. The important thing to remember is that you don’t need to purchase a piece of exercise equipment to strengthen your abs. If, however, you find that an ab device inspires you to stick with your exercise program, then it may be valuable. It’s also important to remember that everybody does ab exercises differently, and people need to get out of the mindset that all exercises work for all people. As expected, the effectiveness of each exercise varied from subject to subject depending on factors such as athleticism, familiarization with the exercises and past injuries. For best results, Dr. Francis recommends choosing several of the exercises that landed in the top-third of the list and try doing a five-minute exercise session daily. If an exercise is uncomfortable or doesn’t feel right, try another one. This will help train different muscles and combat boredom. No matter which exercises you choose, take the time to train and strengthen your abdominal muscles. Strong abs help with good posture, alleviate lower back pain and are essential for long-term health and well being. This study was conducted by Peter Francis, Ph.D., and Jennifer Davis, M.A., at the San Diego State University Biomechanics Lab. The study was not supported or funded in any way by equipment manufacturers.

How to do the Top Ab Exercises Correctly A. Bicycle Maneuver: Lie flat on the floor with your lower back pressed to the ground. Put your hands beside your head. Bring knees up to about 45degree angle and slowly go through a bicycle pedal motion. Touch your left elbow to your right knee, then your right elbow to your left knee. Keep even, relaxed breathing throughout. B. Captain’s Chair: Stabilize your upper body by gripping the hand holds and lightly pressing your lower back against the back pad. The starting position begins with you holding your body up with legs dangling below. Now slowly lift your knees in toward your chest. The motion should be controlled and deliberate as you bring the knees up and return them back to the starting position. C. Crunch on Exercise Ball: Sit on the ball with your feet flat on the floor. Let the ball roll back slowly. Now lie back on the ball until your thighs and torso are parallel with the floor. Cross your arms over your chest and slightly tuck your chin in toward your chest. Contract your abdominals raising your torso to no more than 45 degrees. For better balance, spread your feet wider apart. To challenge the obliques, make the exercise less stable by moving your feet closer together. Exhale as you contract; inhale as you return to the starting position.

ased on EMG activity recorded during the study, Dr. Francis notes the average exerciser appears unable to differentially recruit the upper and lower abdominal muscles. Translation: most exercisers cannot trigger a contraction in one particular part of the abdominal muscles—upper or lower abs. Despite popular theory among fitness professionals, his data suggest that the upper and lower rectus abdominus act as a sheath, or one large muscle group. “In looking carefully at this issue, we noticed that the folding of the skin during a number of ab exercises moved the electrodes away from the muscles we were monitoring. And that has a very significant effect of the signal picked up from the muscles,” say Dr. Francis. “This may account for the small numdies that have suggested you can recruit the upper and lower abs independently.”

In recent years, a host of infomercial products and exercise videos have preyed on people’s desire for a toned mid-section. But what is the best, most efficient route to tighter abs? We look at 13 of the most common ab exercises, ranking them from best to worst. 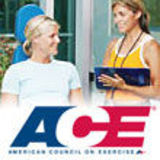