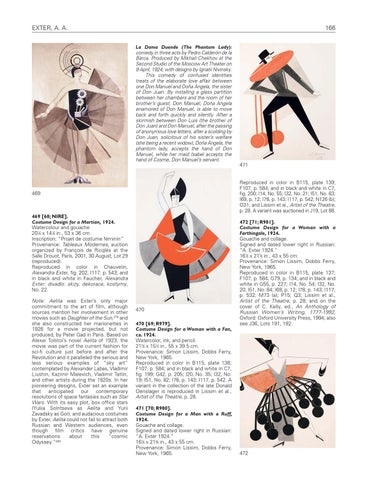 Note: Aelita was Exter’s only major commitment to the art of film, although sources mention her involvement in other movies such as Daughter of the Sun,279 and she also constructed her marionettes in 1926 for a movie projected, but not produced, by Peter Gad in Paris. Based on Alexei Tolstoi’s novel Aelita of 1923, the movie was part of the current fashion for sci-fi culture just before and after the Revolution and it paralleled the serious and less serious examples of “sky art” contemplated by Alexander Labas, Vladimir Liushin, Kazimir Malevich, Vladimir Tatlin, and other artists during the 1920s. In her pioneering designs, Exter set an example that anticipated our contemporary resolutions of space fantasies such as Star Wars. With its easy plot, box office stars (Yuliia Solntseva as Aelita and Yurii Zavadsky as Gor), and audacious costumes by Exter, Aelita could not fail to attract both Russian and Western audiences, even though film critics have genuine reservations about this “cosmic Odyssey.”280

La Dama Duende (The Phantom Lady): comedy in three acts by Pedro Calderón de la Barca. Produced by Mikhail Chekhov at the Second Studio of the Moscow Art Theater on 9 April, 1924, with designs by Ignatii Nivinsky. This comedy of confused identities treats of the elaborate love affair between one Don Manuel and Doña Angela, the sister of Don Juan. By installing a glass partition between her chambers and the room of her brother’s guest, Don Manuel, Doña Angela enamored of Don Manuel, is able to move back and forth quickly and silently. After a skirmish between Don Luis (the brother of Don Juan) and Don Manuel, after the passing of anonymous love letters, after a scolding by Don Juan, solicitous of his sister’s welfare (she being a recent widow), Doña Angela, the phantom lady, accepts the hand of Don Manuel, while her maid Isabel accepts the hand of Cosme, Don Manuel’s servant.

Note: There is some question as to the attribution of No. 473 [NIRE] to Exter and, in any case, as to the exact date and application of her stage designs for La Dama Duende, although it is known that she worked on an unrealized production at the Moscow Art Theater as early as 1919. Moreover, according to Lissim et al., Artist of the Theater (p. 38), Exter also designed costumes for a 1921 production at the Second Studio of the Moscow Art Theater, but other sources (e.g. C182) omit any reference to such a production. However, Mikhail Chekhov did produce La Dama Duende there on 9 April, 1924, with designs by Ignatii Nivinsky, a former student of Exter, although, in his book (G42, pp. 203-04),

she emigrated to Paris early in 1924, she or Chekhov may have passed on the project to Nivinsky (see No. 801 [R682]). There is no evidence to assume — as has been done traditionally — that Exter worked on a separate Paris production also in 1924.281 Various projects. Exter made the following designs (Nos. 474-80 [R982-88]) between ca. 1925 and ca. 1927. In greater or lesser degree they all relate to the set of fifteen gouaches au pochoir, or silkscreens, that she compiled for the album Alexandra Exter. Décors de Théâtre (see Nos. 483-97 [R989-1003]). Nos. 476 [R984], 479 [R987], and 480 [R988] are the original gouaches for the silkscreen duplicates. None of the designs seems to have been used for an actual production, although the intensity with which Exter worked on them indicates that she was expecting commissions. 473 Donald Oenslager refers to this production as a collaboration between Chekhov and Exter. It is possible that Chekhov first gave the design commission to Exter, but since 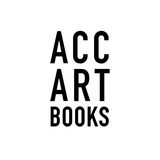 Russian stage designs are immensely pleasing to the eye. They vibrate, and scintillate with colour, texture and movement..

Russian stage designs are immensely pleasing to the eye. They vibrate, and scintillate with colour, texture and movement..