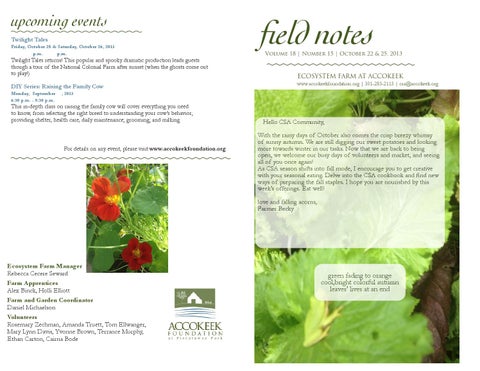 Twilight Tales returns! This popular and spooky dramatic production leads guests though a tour of the National Colonial Farm after sunset (when the ghosts come out to play!) DIY Series: Raising the Family Cow

This in-depth class on raising the family cow will cover everything you need to know, from selecting the right breed to understanding your cowâ&#x20AC;&#x2122;s behavior; providing shelter, health care, daily maintenance; grooming; and milking.

For details on any event, please visit www.accokeekfoundation.org.

Hello CSA Community, With the rainy days of October also comes the crisp breezy whimsy of sunny autumn. We are still digging our sweet potatoes and looking more towards winter in our tasks. Now that we are back to being open, we welcome our busy days of volunteers and market, and seeing all of you once again! As CSA season shifts into fall mode, I encourage you to get creative with your seasonal eating. Delve into the CSA cookbook and find new ways of preparing the fall staples. I hope you are nourished by this weekâ&#x20AC;&#x2122;s offerings. Eat well! love and falling acorns, Farmer Becky

Agrarian vs. Industrial by Holli Elliott As my apprenticeship at Accokeek is drawing to a close, I have been thinking a lot about the value of being connected to a particular place. Reading Wendell Berry the other day, this struck me: “If the ideals and aims of young people have lost energy it’s because they haven’t the stability of a commitment to one place and one community. I think they’re disposed to drift around until they find a suitable community. But no community is suitable. There’s plenty wrong with them all.” That perhaps most of my discomfort could be remedied by committing to a particular place is radical. I thought I’d use this forum to talk about Agrarian (land based) vs. Industrial Society, for this difference between industrialism and agrarianism now defines the most fundamental human difference. It divides not just two nearly opposite concepts of agriculture and land use, but also two nearly opposite ways of understanding our fellow creatures, our world, and ourselves. -------------------------------------An agrarian society is a society that depends on agriculture as its primary means for support and sustenance. Wealth comes from the land. This type of society acknowledges other means of livelihood and work habits, but stresses the importance of agriculture and farming. Agrarian values see rural society as superior to urban society, the independent farmer as superior to the paid worker, and see farming as a way of life that can shape the ideal social values. The Agrarian model was the most common form of socio-economic organization for most of recorded human history. Then came the Industrial Revolution. Industrial society refers to a society driven by the use of technology to enable mass production, supporting a large population with a high capacity for division of labor. Industrial society is characterized by the use of external energy sources, such as fossil fuels, to increase the rate and scale of production. The production of food is shifted to large commercial farms where the products of industry, such as combine harvesters and fossil fuel-based fertilizers, are used to decrease required human labor while increasing production. No longer needed for the production of food, excess labor is moved into factories where mechanization is utilized to further increase efficiency. As populations grow, and mechanization is further refined, often to the level of automation, many workers shift to expanding service industries. Value shifts from land to the ability to purchase goods. Industrial society gives rise to consumerism where specialization and urbanization are seen as desirable, in part so that workers are closer to centers of production. Industrial society provides labor to those that benefit financially from it. The ability to purchase goods defines one’s worth in Industrial society.

Industrialism prescribes an economy not connected to land, and economy that is placeless and displacing. Meaning it does not distinguish one place from another. It applies its methods and technologies indiscriminately all over the globe. It thus continues the economy of colonialism. The shift of colonial power from European monarchy to global corporation is perhaps the dominant theme of modern history. All along, it has been the same story of the gathering of an exploitive economic power into the hands of a few people who are alien to the places and the people they exploit. Such an economy is bound to destroy locally adapted agrarian economies everywhere it goes. In contrast, everything that happens on an agrarian farm is determined or conditioned by the understanding that there is only so much land, so much water in the cistern, so much hay in the barn, so much firewood in the shed, so much food in the cellar or freezer, so much strength in the back and arms—and no more. This is the understanding that induces thrift, family coherence, neighborliness, AND local economies. Within accepted limits, these become necessities. The agrarian sense of abundance comes from the experienced possibility of frugality and renewal within limits. This is exactly the opposite of the industrial idea that abundance comes from the violation of limits: by personal mobility, extractive machinery, long-distance transport, and scientific or technological breakthroughs. If we use up the good possibilities in this place, we will import goods from some other place, or we will go to some other place. If nature releases her wealth too slowly, we will take it by force. In the industrial society, if we make the world too toxic for honeybees, some specialized corporation will invent tiny robots that will fly about pollinating flowers and making honey. It conceives of farming and forestry as forms of mining; it cannot use the land without abusing it. Industrial mindset also has contempt for anything small, rural, or natural and that translates into contempt for uncentralized economic systems, any sort of local selfsufficiency in food or other necessities. The industrial “solution” for such systems is to increase the scale of work and trade. It brings Big Ideas, Big Money, and Big Technology into small rural communities, economies, and ecosystems—the broughtin industry and the experts being invariably alien to and contemptuous of the places to which they are brought in. The result is that problems correctable on a small scale are replaced by large-scale problems for which there are no large-scale corrections. Meanwhile, the large-scale enterprise has reduced or destroyed the possibility of small-scale corrections.

What’s the way out of this predicament? How about promoting the old ideal of personal independence. Not the kind of independence that makes people act without regard for other people or that makes them assume they can get along without other people. The type of independence by which a person provides some of his or her own needs and which permits him or her to do what he or she sees to be right without the approval of consumer culture. We are talking about the type of independence that comes through connection to land and place. Maybe that’s why Thomas Jefferson was an advocate for keeping as many people as possible on the land. He thought keeping people “landed,” independent in the way that the ownership and care of a piece of land can make them, was the best thing for our world. So then everybody needs to own some land in order to be empowered and independent? How’s that going to work? Here’s a simple solution: don’t think that being landed necessarily means owning land. It definitely means being connected to a home landscape from which one may live by the interactions of a local economy (and without the routine intervention of governments, corporations, or charities), but one doesn’t have to be the owner in order to cultivate the connection, does she? Connecting to the land without owning it is vulnerable, but not impossible. The agrarian population among us is growing, and by no means is it made up merely of some farmers and some country people. It includes urban gardeners, urban consumers who are buying food from local farmers, consumers who have grown doubtful of the healthfulness, the trustworthiness, and the dependability of the corporate food system—people, in other words, who understand the value of being connected to land and place. Going forward, may all of us who hold Agrarian ideals, but no title to land, have the faith to cultivate connection to a particular place and find ourselves “landed” regardless of who owns what. Jai-ho!