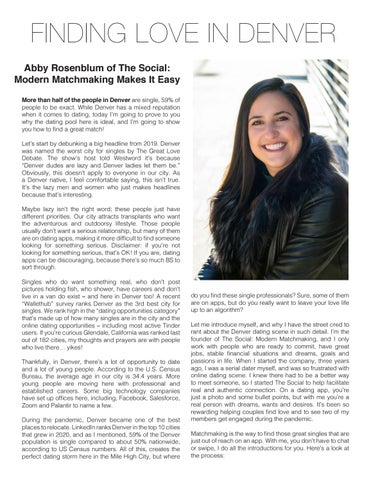 FINDING LOVE IN DENVER Abby Rosenblum of The Social: Modern Matchmaking Makes It Easy More than half of the people in Denver are single, 59% of people to be exact. While Denver has a mixed reputation when it comes to dating, today I’m going to prove to you why the dating pool here is ideal, and I’m going to show you how to find a great match! Let’s start by debunking a big headline from 2019. Denver was named the worst city for singles by The Great Love Debate. The show’s host told Westword it’s because “Denver dudes are lazy and Denver ladies let them be.” Obviously, this doesn’t apply to everyone in our city. As a Denver native, I feel comfortable saying, this isn’t true. It’s the lazy men and women who just makes headlines because that’s interesting. Maybe lazy isn’t the right word; these people just have different priorities. Our city attracts transplants who want the adventurous and outdoorsy lifestyle. Those people usually don’t want a serious relationship, but many of them are on dating apps, making it more difficult to find someone looking for something serious. Disclaimer: if you’re not looking for something serious, that’s OK! If you are, dating apps can be discouraging, because there’s so much BS to sort through. Singles who do want something real, who don’t post pictures holding fish, who shower, have careers and don’t live in a van do exist – and here in Denver too! A recent “Wallethub” survey ranks Denver as the 3rd best city for singles. We rank high in the “dating opportunities category” that’s made up of how many singles are in the city and the online dating opportunities – including most active Tinder users. If you’re curious Glendale, California was ranked last out of 182 cities, my thoughts and prayers are with people who live there… yikes! Thankfully, in Denver, there’s a lot of opportunity to date and a lot of young people. According to the U.S. Census Bureau, the average age in our city is 34.4 years. More young people are moving here with professional and established careers. Some big technology companies have set up offices here, including, Facebook, Salesforce, Zoom and Palantir to name a few. During the pandemic, Denver became one of the best places to relocate. LinkedIn ranks Denver in the top 10 cities that grew in 2020, and as I mentioned, 59% of the Denver population is single compared to about 50% nationwide, according to US Census numbers. All of this, creates the perfect dating storm here in the Mile High City, but where

do you find these single professionals? Sure, some of them are on apps, but do you really want to leave your love life up to an algorithm? Let me introduce myself, and why I have the street cred to rant about the Denver dating scene in such detail. I’m the founder of The Social: Modern Matchmaking, and I only work with people who are ready to commit, have great jobs, stable financial situations and dreams, goals and passions in life. When I started the company, three years ago, I was a serial dater myself, and was so frustrated with online dating scene. I knew there had to be a better way to meet someone, so I started The Social to help facilitate real and authentic connection. On a dating app, you’re just a photo and some bullet points, but with me you’re a real person with dreams, wants and desires. It’s been so rewarding helping couples find love and to see two of my members get engaged during the pandemic. Matchmaking is the way to find those great singles that are just out of reach on an app. With me, you don’t have to chat or swipe, I do all the introductions for you. Here’s a look at the process: