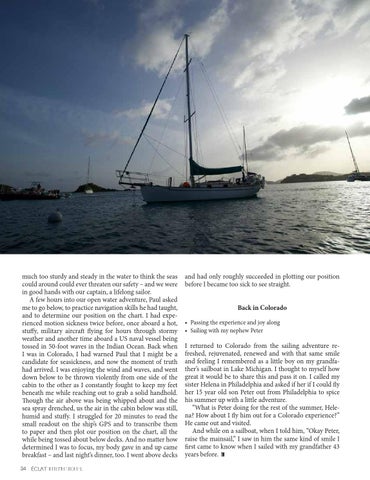 much too sturdy and steady in the water to think the seas could around could ever threaten our safety – and we were in good hands with our captain, a lifelong sailor. A few hours into our open water adventure, Paul asked me to go below, to practice navigation skills he had taught, and to determine our position on the chart. I had experienced motion sickness twice before, once aboard a hot, stuffy, military aircraft flying for hours through stormy weather and another time aboard a US naval vessel being tossed in 50-foot waves in the Indian Ocean. Back when I was in Colorado, I had warned Paul that I might be a candidate for seasickness, and now the moment of truth had arrived. I was enjoying the wind and waves, and went down below to be thrown violently from one side of the cabin to the other as I constantly fought to keep my feet beneath me while reaching out to grab a solid handhold. Though the air above was being whipped about and the sea spray drenched, us the air in the cabin below was still, humid and stuffy. I struggled for 20 minutes to read the small readout on the ship’s GPS and to transcribe them to paper and then plot our position on the chart, all the while being tossed about below decks. And no matter how determined I was to focus, my body gave in and up came breakfast – and last night’s dinner, too. I went above decks 34

and had only roughly succeeded in plotting our position before I became too sick to see straight. Back in Colorado • Passing the experience and joy along • Sailing with my nephew Peter

I returned to Colorado from the sailing adventure refreshed, rejuvenated, renewed and with that same smile and feeling I remembered as a little boy on my grandfather’s sailboat in Lake Michigan. I thought to myself how great it would be to share this and pass it on. I called my sister Helena in Philadelphia and asked if her if I could fly her 15 year old son Peter out from Philadelphia to spice his summer up with a little adventure. “What is Peter doing for the rest of the summer, Helena? How about I fly him out for a Colorado experience?” He came out and visited. And while on a sailboat, when I told him, “Okay Peter, raise the mainsail,” I saw in him the same kind of smile I first came to know when I sailed with my grandfather 43 years before.