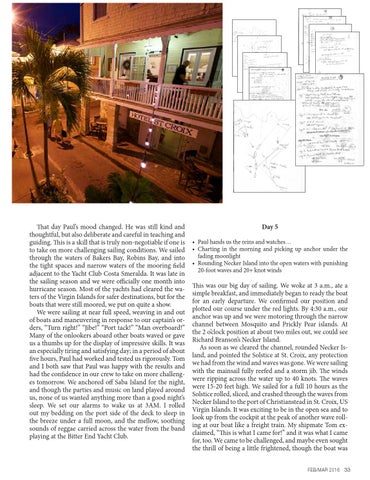 That day Paul’s mood changed. He was still kind and thoughtful, but also deliberate and careful in teaching and guiding. This is a skill that is truly non-negotiable if one is to take on more challenging sailing conditions. We sailed through the waters of Bakers Bay, Robins Bay, and into the tight spaces and narrow waters of the mooring field adjacent to the Yacht Club Costa Smeralda. It was late in the sailing season and we were officially one month into hurricane season. Most of the yachts had cleared the waters of the Virgin Islands for safer destinations, but for the boats that were still moored, we put on quite a show. We were sailing at near full speed, weaving in and out of boats and maneuvering in response to our captain’s orders, “Turn right!” “Jibe!” “Port tack!” “Man overboard!” Many of the onlookers aboard other boats waved or gave us a thumbs up for the display of impressive skills. It was an especially tiring and satisfying day; in a period of about five hours, Paul had worked and tested us rigorously. Tom and I both saw that Paul was happy with the results and had the confidence in our crew to take on more challenges tomorrow. We anchored off Saba Island for the night, and though the parties and music on land played around us, none of us wanted anything more than a good night’s sleep. We set our alarms to wake us at 3AM. I rolled out my bedding on the port side of the deck to sleep in the breeze under a full moon, and the mellow, soothing sounds of reggae carried across the water from the band playing at the Bitter End Yacht Club.

This was our big day of sailing. We woke at 3 a.m., ate a simple breakfast, and immediately began to ready the boat for an early departure. We confirmed our position and plotted our course under the red lights. By 4:30 a.m., our anchor was up and we were motoring through the narrow channel between Mosquito and Prickly Pear islands. At the 2 o’clock position at about two miles out, we could see Richard Branson’s Necker Island. As soon as we cleared the channel, rounded Necker Island, and pointed the Solstice at St. Croix, any protection we had from the wind and waves was gone. We were sailing with the mainsail fully reefed and a storm jib. The winds were ripping across the water up to 40 knots. The waves were 15-20 feet high. We sailed for a full 10 hours as the Solstice rolled, sliced, and crashed through the waves from Necker Island to the port of Christianstead in St. Croix, US Virgin Islands. It was exciting to be in the open sea and to look up from the cockpit at the peak of another wave rolling at our boat like a freight train. My shipmate Tom exclaimed, “This is what I came for!” and it was what I came for, too. We came to be challenged, and maybe even sought the thrill of being a little frightened, though the boat was FEB/MAR 2016 33