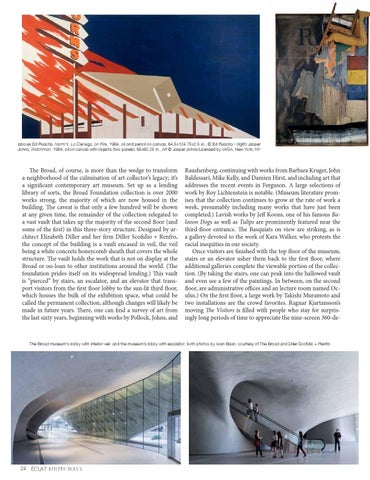 The Broad, of course, is more than the wedge to transform a neighborhood of the culmination of art collector’s legacy; it’s a significant contemporary art museum. Set up as a lending library of sorts, the Broad Foundation collection is over 2000 works strong, the majority of which are now housed in the building. The caveat is that only a few hundred will be shown at any given time, the remainder of the collection relegated to a vast vault that takes up the majority of the second floor (and some of the first) in this three-story structure. Designed by architect Elizabeth Diller and her firm Diller Scofidio + Renfro, the concept of the building is a vault encased in veil, the veil being a white concrete honeycomb sheath that covers the whole structure. The vault holds the work that is not on display at the Broad or on-loan to other institutions around the world. (The foundation prides itself on its widespread lending.) This vault is “pierced” by stairs, an escalator, and an elevator that transport visitors from the first floor lobby to the sun-lit third floor, which houses the bulk of the exhibition space, what could be called the permanent collection, although changes will likely be made in future years. There, one can find a survey of art from the last sixty years, beginning with works by Pollock, Johns, and

Raushenberg, continuing with works from Barbara Kruger, John Baldessari, Mike Kelly, and Damien Hirst, and including art that addresses the recent events in Ferguson. A large selections of work by Roy Lichtenstein is notable. (Museum literature promises that the collection continues to grow at the rate of work a week, presumably including many works that have just been completed.) Lavish works by Jeff Koons, one of his famous Balooon Dogs as well as Tulips are prominently featured near the third-floor entrance. The Basquiats on view are striking, as is a gallery devoted to the work of Kara Walker, who protests the racial inequities in our society. Once visitors are finished with the top floor of the museum, stairs or an elevator usher them back to the first floor, where additional galleries complete the viewable portion of the collection. (By taking the stairs, one can peak into the hallowed vault and even see a few of the paintings. In between, on the second floor, are administrative offices and an lecture room named Oculus.) On the first floor, a large work by Takishi Muramoto and two installations are the crowd favorites. Ragnar Kjartansson’s moving The Visitors is filled with people who stay for surprisingly long periods of time to appreciate the nine-screen 360-de-

The Broad museum's lobby with interior veil and the museum’s lobby with escalator; both photos by Iwan Baan, courtesy of The Broad and Diller Scofidio + Renfro