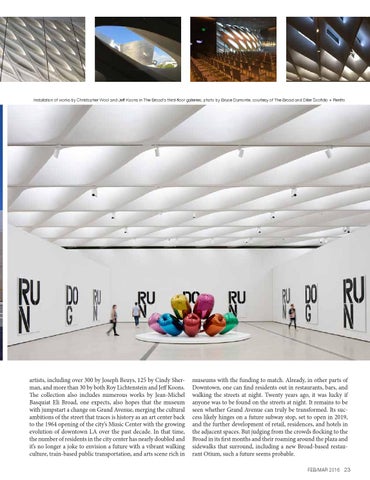 Installation of works by Christopher Wool and Jeff Koons in The Broad&#39;s third-floor galleries; photo by Bruce Damonte, courtesy of The Broad and Diller Scofidio + Renfro

artists, including over 300 by Joseph Beuys, 125 by Cindy Sherman, and more than 30 by both Roy Lichtenstein and Jeff Koons. The collection also includes numerous works by Jean-Michel Basquiat Eli Broad, one expects, also hopes that the museum with jumpstart a change on Grand Avenue, merging the cultural ambitions of the street that traces is history as an art center back to the 1964 opening of the cityâ&amp;#x20AC;&amp;#x2122;s Music Center with the growing evolution of downtown LA over the past decade. In that time, the number of residents in the city center has nearly doubled and itâ&amp;#x20AC;&amp;#x2122;s no longer a joke to envision a future with a vibrant walking culture, train-based public transportation, and arts scene rich in

museums with the funding to match. Already, in other parts of Downtown, one can find residents out in restaurants, bars, and walking the streets at night. Twenty years ago, it was lucky if anyone was to be found on the streets at night. It remains to be seen whether Grand Avenue can truly be transformed. Its success likely hinges on a future subway stop, set to open in 2019, and the further development of retail, residences, and hotels in the adjacent spaces. But judging from the crowds flocking to the Broad in its first months and their roaming around the plaza and sidewalks that surround, including a new Broad-based restaurant Otium, such a future seems probable. FEB/MAR 2016 23