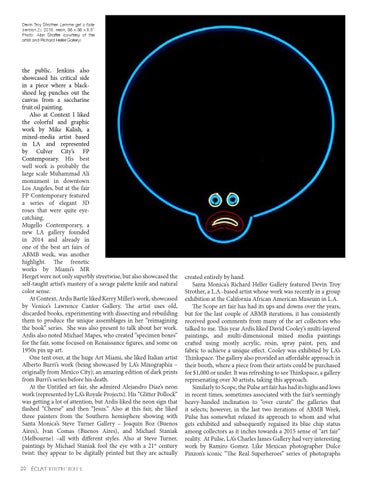 the public. Jenkins also showcased his critical side in a piece where a blackshoed leg punches out the canvas from a saccharine fruit oil painting. Also at Context I liked the colorful and graphic work by Mike Kalish, a mixed-media artist based in LA and represented by Culver City’s FP Contemporary. His best well work is probably the large scale Muhammad Ali monument in downtown Los Angeles, but at the fair FP Contemporary featured a series of elegant 3D roses that were quite eyecatching. Mugello Contemporary, a new LA gallery founded in 2014 and already in one of the best art fairs of ABMB week, was another highlight. The frenetic works by Miami’s MR Herget were not only superbly streetwise, but also showcased the self-taught artist’s mastery of a savage palette knife and natural color sense. At Context, Ardis Bartle liked Kerry Miller’s work, showcased by Venice’s Lawrence Cantor Gallery. The artist uses old, discarded books, experimenting with dissecting and rebuilding them to produce the unique assemblages in her “reimagining the book” series.  She was also present to talk about her work.  Ardis also noted Michael Mapes, who created “specimen boxes” for the fair, some focused on Renaissance figures, and some on 1950s pin up art. One tent over, at the huge Art Miami, she liked Italian artist Alberto Burri’s work (being showcased by LA’s Mixographia – originally from Mexico City); an amazing edition of dark prints from Burri’s series before his death. At the Untitled art fair, she admired Alejandro Diaz’s neon work (represented by LA’s Royale Projects). His “Glitter Pollock” was getting a lot of attention, but Ardis liked the neon sign that flashed “Cheese” and then “Jesus.” Also at this fair, she liked three painters from the Southern hemisphere showing with Santa Monica’s Steve Turner Gallery – Joaquin Boz (Buenos Aires), Ivan Comas (Buenos Aires), and Michael Staniak (Melbourne) –all with different styles. Also at Steve Turner, paintings by Michael Staniak fool the eye with a 21st century twist: they appear to be digitally printed but they are actually 20

created entirely by hand.   Santa Monica’s Richard Heller Gallery featured Devin Troy Strother, a L.A.-based artist whose work was recently in a group exhibition at the California African American Museum in L.A. The Scope art fair has had its ups and downs over the years, but for the last couple of ABMB iterations, it has consistently received good comments from many of the art collectors who talked to me. This year Ardis liked David Cooley’s multi-layered paintings, and multi-dimensional mixed media paintings crafted using mostly acrylic, resin, spray paint, pen, and fabric to achieve a unique effect. Cooley was exhibited by LA’s Thinkspace. The gallery also provided an affordable approach in their booth, where a piece from their artists could be purchased for $1,000 or under. It was refreshing to see Thinkspace, a gallery represenating over 30 artists, taking this approach. Similarly to Scope, the Pulse art fair has had its highs and lows in recent times, sometimes associated with the fair’s seemingly heavy-handed inclination to “over curate” the galleries that it selects; however, in the last two iterations of ABMB Week, Pulse has somewhat relaxed its approach to whom and what gets exhibited and subsequently regained its blue chip status among collectors as it inches towards a 2015 sense of “art fair” reality. At Pulse, LA’s Charles James Gallery had very interesting work by Ramiro Gomez. Like Mexican photographer Dulce Pinzon’s iconic “The Real Superheroes” series of photographs