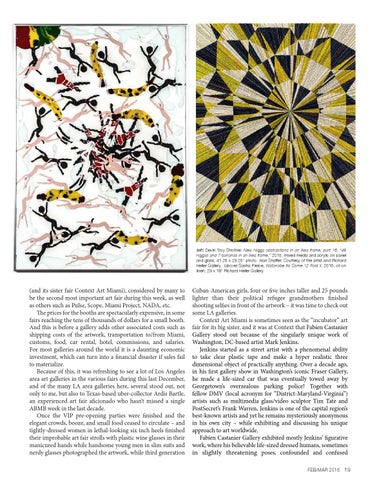 (and its sister fair Context Art Miami), considered by many to be the second most important art fair during this week, as well as others such as Pulse, Scope, Miami Project, NADA, etc. The prices for the booths are spectacularly expensive, in some fairs reaching the tens of thousands of dollars for a small booth. And this is before a gallery adds other associated costs such as shipping costs of the artwork, transportation to/from Miami, customs, food, car rental, hotel, commissions, and salaries. For most galleries around the world it is a daunting economic investment, which can turn into a financial disaster if sales fail to materialize. Because of this, it was refreshing to see a lot of Los Angeles area art galleries in the various fairs during this last December, and of the many LA area galleries here, several stood out, not only to me, but also to Texas-based uber-collector Ardis Bartle, an experienced art fair aficionado who hasn’t missed a single ABMB week in the last decade. Once the VIP pre-opening parties were finished and the elegant crowds, booze, and small food ceased to circulate – and tightly-dressed women in lethal-looking six inch heels finished their improbable art fair strolls with plastic wine glasses in their manicured hands while handsome young men in slim suits and nerdy glasses photographed the artwork, while third generation

Cuban-American girls, four or five inches taller and 25 pounds lighter than their political refugee grandmothers finished shooting selfies in front of the artwork – it was time to check out some LA galleries. Context Art Miami is sometimes seen as the “incubator” art fair for its big sister, and it was at Context that Fabien Castanier Gallery stood out because of the singularly unique work of Washington, DC-based artist Mark Jenkins. Jenkins started as a street artist with a phenomenal ability to take clear plastic tape and make a hyper realistic three dimensional object of practically anything. Over a decade ago, in his first gallery show in Washington’s iconic Fraser Gallery, he made a life-sized car that was eventually towed away by Georgetown’s overzealous parking police! Together with fellow DMV (local acronym for “District-Maryland-Virginia”) artists such as multimedia glass/video sculptor Tim Tate and PostSecret’s Frank Warren, Jenkins is one of the capital region’s best-known artists and yet he remains mysteriously anonymous in his own city – while exhibiting and discussing his unique approach to art worldwide. Fabien Castanier Gallery exhibited mostly Jenkins’ figurative work, where his believable life-sized dressed humans, sometimes in slightly threatening poses, confounded and confused FEB/MAR 2016 19