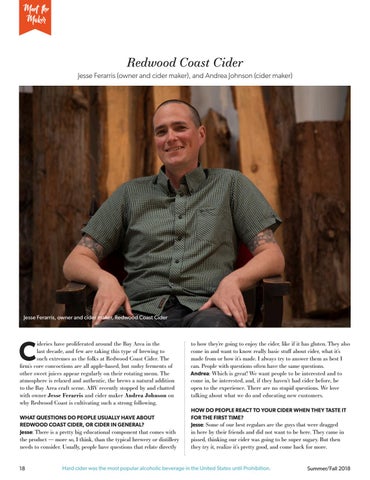 ideries have proliferated around the Bay Area in the last decade, and few are taking this type of brewing to such extremes as the folks at Redwood Coast Cider. The firm’s core concoctions are all apple-based, but sudsy ferments of other sweet juices appear regularly on their rotating menu. The atmosphere is relaxed and authentic, the brews a natural addition to the Bay Area craft scene. ABV recently stopped by and chatted with owner Jesse Ferarris and cider maker Andrea Johnson on why Redwood Coast is cultivating such a strong following. WHAT QUESTIONS DO PEOPLE USUALLY HAVE ABOUT REDWOOD COAST CIDER, OR CIDER IN GENERAL? Jesse: There is a pretty big educational component that comes with the product — more so, I think, than the typical brewery or distillery needs to consider. Usually, people have questions that relate directly

to how they’re going to enjoy the cider, like if it has gluten. They also come in and want to know really basic stuff about cider, what it’s made from or how it’s made. I always try to answer them as best I can. People with questions often have the same questions. Andrea: Which is great! We want people to be interested and to come in, be interested, and, if they haven’t had cider before, be open to the experience. There are no stupid questions. We love talking about what we do and educating new customers. HOW DO PEOPLE REACT TO YOUR CIDER WHEN THEY TASTE IT FOR THE FIRST TIME? Jesse: Some of our best regulars are the guys that were dragged in here by their friends and did not want to be here. They came in pissed, thinking our cider was going to be super sugary. But then they try it, realize it’s pretty good, and come back for more.

Hard cider was the most popular alcoholic beverage in the United States until Prohibition. 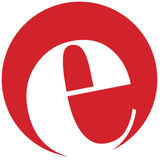 Take a trip down the coast as we sample craft beers. Also, some cool haunted cocktail recipes, and more.

Take a trip down the coast as we sample craft beers. Also, some cool haunted cocktail recipes, and more.