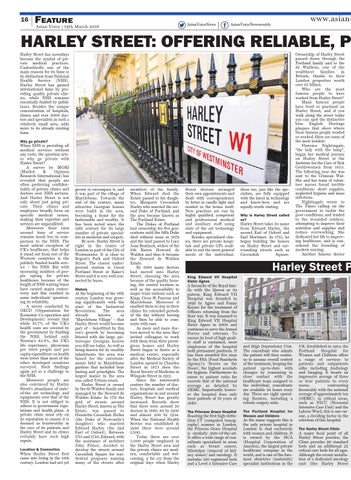 Harley Street has nowadays become the symbol of private medical practices. Undoubtedly one of the main reasons for its fame is its distinction from National Health Service (NHS). Harley Street has gained international fame by providing quality private clinics, while NHS remains essentially funded by public taxes. Besides the unique concentration of hospitals, clinics and over 3000 doctors and specialists in such a relatively small area, adds more to its already existing fame. Why go private? When NHS is providing all medical services without any costs, the question arises why go private with Harley Street? A survey by MORI (Market & Opinion Research International) has revealed that people are often preferring confidentiality of private clinics and doctors over NHS services. And Harley Street is not only about just going private. Their clinics and employees broadly focus on specific medical issues, making their expertise and services are unparalleled. Moreover their turn around time of service remains much less in comparison to the NHS. The most salient exception of UK's healthcare, that helps it stand out from rest of the Western countries is the publicly funded health service – the NHS. But with increasing numbers of people opting for private healthcare because of the length of NHS waiting times have caused major controversy and this resulted in some individuals’ questioning its reliability. A survey conducted by OECD (Organisation for Economic Co-operation and Development) reveals that while 81.7% of the UK’s health costs are covered by the government by funding the NHS, behind only Norway’s 83.6%, the UK’s life expectancy, physicians per 1000 people and per capita expenditure on health were lower than most of the other developed countries surveyed. Such findings again act as a challenge to the NHS. Moreover people are also convinced by Harley Street's abundance of stateof-the art technology and equipments over that of the NHS. It is not obliged to adhere to government regulations and health plans. A private clinic must rely on its reputation to ensure it is deemed as trustworthy in the eyes of its patients and Harley Street and its clinics certainly have such high repute. Location & Connection When Harley Street first came into being in the 18th century, London had not yet

grown to encompass it, and it was part of the village of Marylebone. Towards the end of the century, many attractive Georgian houses were build in the area, becoming a home for the fashionable and wealthy. It has been noted since the 19th century for its large number of private specialists in medicine and surgery. By now, Harley Street is right in the centre of London as part of the City of Westminster. It is close to Regent’s Park and Oxford Street. The closest underground station is Great Portland Street or Baker's Street and it is very well connected by buses. History At the beginning of the 18th century London was growing significantly with the start of the Industrial Revolution. The area already known as “Marylebone Village” – that Harley Street would become part of – benefitted by this era’s growth by becoming littered with the large, picturesque Georgian houses you still see today. As well as being known for its wealthy inhabitants the area was famed for the entertainments held in Marylebone gardens that included bear baiting and prizefights. The largest manor in the area was called Tyburn estate. Harley Street is owned by the de Walden family and managed by the Howard de Walden Estate. In 1711 the grid of streets around Harley Street, known as The Estate, was passed to Henrietta Cavendish Holles (the Duke of Newcastle's daughter) who married Edward Harley (the 2nd Earl of Oxford). Between 1715 and 1720, Edward, with the assistance of architect John Prince, decided to develop the streets around Cavendish Square for residential purposes naming many of the streets after

members of the family. When Edward died the Estate passed to his daughter, Margaret Cavendish Harley who married the second Duke of Portland, and the area became known as The Portland Estate. The Dukes of Portland had ownership for five generations until the fifth Duke died without issue in 1879 and the land passed to Lucy Joan Bentinck, widow of the 6th Baron Howard de Walden and thus it became the Howard de Walden Estate. By 1860 many doctors had moved into Harley Street, choosing the area because of the quality housing, the central location as well as the accessibility to major train stations such as Kings Cross St Pancras and Marylebone. Moreover it enabled them to stay in their clinics for extended periods of the day without leaving and then be able to commute with ease. As more and more doctors moved to the area they invited colleagues to work with them from their prestigious homes and Harley Street began to thrive as a medical centre, especially after the Medical Society of London opened in Chandos Street in 1873 then the Royal Society of Medicine in Wimpole Street in 1912. Since the nineteenth century the number of doctors, hospitals and medical organisations in and around Harley Street has greatly increased. Records show that there were around 20 doctors in 1860, 80 by 1900 and almost 200 by 1914. When the National Health Service was established in 1948 there were around 1,500. Today there are over 3,000 people employed in the Harley Street area and the private clinics are modern, comfortable and welcoming; a far cry from the original days when Harley

Street doctors arranged their own appointments and dealt with correspondence by letter in candle light and resided in the house itself. Now practices are run by highly qualified, competent and professional medical and auxiliary staff using state of the art technology and equipment. Besides specialised clinics, there are private hospitals and private GPs available to suit the more general needs of the individual;

these too, just like the specialists, are fully equipped with the latest in technology and know-how and are equally worth visiting. Why is Harley Street called so? Harley Street takes its name from Edward Harley, the second Earl of Oxford and Earl Mortimer. In 1715, he began building the houses on Harley Street and surrounding streets such as Cavendish Square.

Ownership of Harley Street passed down through the Portland family and to the de Waldens, one of the wealthiest families in Britain, thanks to their London properties worth over £1 billion. Who are the most famous people to have worked from Harley Street? Many famous people have lived or practised on Harley Street, and if you walk along the street today you can spot the distinctive blue English Heritage plaques that show where these famous people resided or worked. Here are some of the most notable: Florence Nightingale, “the lady with the lamp”, began her medical journey on Harley Street at the Institute for the Care of Sick Gentlewomen from 1853. The following year she was sent to the Crimean War. She and her team of volunteer nurses found terrible conditions: short supplies, neglected hygiene and mass infections. Nightingale wrote to The Times calling on the government to tackle the poor conditions, and tended to the wounded soldiers, attempting to improve their nutrition and supplies and reduce overworking. She dedicated her life to improving healthcare, and is considered the founding of modern nursing. Another famous doctor

King Edward VII Hospital Sister Agnes A favourite of the Royal family with the Queen as its patron, King Edward VII Hospital was founded in 1899 by Agnes and Fanny Keyser for the treatment of Officers returning from the Boer war. It was renamed to King Edward VII Hospital Sister Agnes in 2000 and continues to serve the Armed Forces and veterans. To ensure its level of high quality staff is sustained, most employees of the hospital hold permanent positions. It has been awarded five stars by the FSA (Food Standards Agency)’s ‘Scores on the Doors’, the highest accolade for hygiene. Furthermore its nurse to patient ratio far exceeds that of the national average as detailed by OEMC. Importantly however the hospital does only treat patients of 18 years or older.

and High Dependency Unit. The consultant who admits the patient will then continue to assume overall control of the treatment, keeping the patient up-to-date with changes by remaining in close contact with the healthcare team assigned to the individual; consultants are available 24 hours every day. There are eight operating theatres, including a robotic surgery suite.

The Portland Hospital for Women and Children As the name suggests this is the only private hospital in London to deal exclusively with women and children. It is owned by the HCA (Hospital Corporation of America), the largest private healthcare company in the world, and is one of the foremost obstetrics (maternity) specialist institutions in the

UK. Established in 1983, the Portland Hospital for Women and Children offers a range of services to patients and outpatients alike including Audiology and Imaging. It boasts an impressive average of three or four patients to every nurse, contrasting favourably with the national average of approximately ten (OEMC); in critical areas, such as NICU (Neonatal Intensive Care Unit) and the Labour Ward, this is one-onone, a deciding factor in the selection of this hospital. The Harley Street Clinic A major focal point of all Harley Street practice, the Clinic provides 90 standard beds and an additional 22 critical care beds for all ages. Although the recent installation of a dedicated oncology unit (the Harley Street