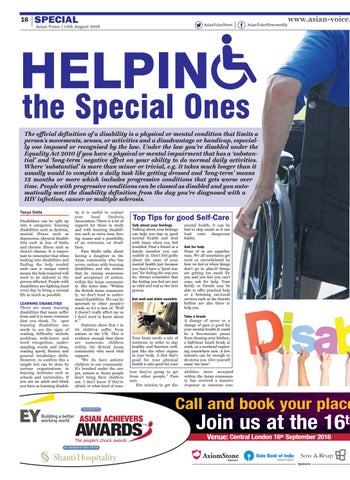 OVERALL WEIGHT The overall weight of the wheelchair can vary from chair to chair.The lighter the chair the easier it is to load into a car, and easier to push, but the lighter the chair, as a rule, the more it costs.Another thing to bear in mind is that some chairs can dismantle for transport.

LEARNING DISABILITIES There are many learning disabilities that many suffer from and it is more common that you think. To spot learning disabilities one needs to see the signs of reading difficulty include problems with:letter and word recognition, understanding words and ideas, reading speed, fluency and general vocabulary skills. However, to confirm this a simple test can be done by various organisations in learning institutes such as schools and universities. If you are an adult and think you have as learning disabil-

Your brain needs a mix of nutrients in order to stay healthy and function well, just like the other organs in your body. A diet that’s good for your physical health is also good for your tion they’re going to get from other people,” Pam says. Her mission to get dis-

ACCESSING THE RIGHT SIZE One needs to consider the user’s weight as most standard wheelchairs have a weight limit of around 18 stones. This weight should not be exceeded as the wheelchair will not have been designed to carry more weight and could become dangerous. Also, it is imperative that you choose a wheelchair that is the correct size for you.

Talk about your feelings Talking about your feelings can help you stay in good mental health and deal with times when you feel troubled. Find a friend or a family member you can confide in. Don’t feel guilty about the state of your mental health just because you don’t have a “good reason” for feeling the way you do. Always remember that the feeling you feel are just as valid and real as the next person.

groups such as Asians living in the UK aremore likely to be diagnosed with mental health problems, admitted to hospital and experience a poor outcome from treatment. These differences may be explained by a number of factors including poverty and racism. The reason for this may also be because mainstream mental health services often fail to understand or provide services that are acceptable and accessible to non-white British communities and meet their particular cultural needs. There are heavy stigmas attached to those suffering from poor mental health which leads the the underutilisation of mental health services and for all Asian groups, there is a stigma attached to going to an outsider to obtain treatment for mental health problems rather than sorting it out within the family or on their own. The statistics on the numbers of Asian people in the United Kingdom with mental health problems are inconsistent, although it has been suggested that mental health problems are often unrecognised or not diagnosed in this ethnic group. Living with depression and anxiety is a constant struggle but the number 1 way to help ease it is good self care, never forget to look after

SELF-PROPEL OR ATTENDANT This is determined if one wants to propel themselves using push rims outside of the wheels. If you are not strong enough or capable to propel the chair yourself, then you may opt for a transit chair.

The official definition of a disability is a physical or mental condition that limits a person's movements, senses, or activities and a disadvantage or handicap, especially one imposed or recognised by the law. Under the law you’re disabled under the Equality Act 2010 if you have a physical or mental impairment that has a ‘substantial’ and ‘long-term’ negative effect on your ability to do normal daily activities. Where ‘substantial’ is more than minor or trivial, e.g. it takes much longer than it usually would to complete a daily task like getting dressed and ‘long-term’ means 12 months or more which includes progressive conditions that gets worse over time. People with progressive conditions can be classed as disabled and you automatically meet the disability definition from the day you’re diagnosed with a HIV infection, cancer or multiple sclerosis. ity it is useful to contact your local Dyslexia Association. There is a lot of support for those in study and with learning disabilities such as extra time during exams and a possibility of an extension on deadlines. Pam Malhi talks about having a daughter in the Asian community who has severe autism with learning disabilities and she wishes that by raising awareness and acceptance of autism, within the Asian community. She notes that: “Within the British Asian community, we don’t tend to understand disabilities. We can be ignorant to other people’s needs so it’s a case of, ‘Well it doesn’t really affect me so I don’t need to know about it’.” Statistics show that 1 in 68 children suffer from autism in the UK. This is evidence enough that there are numerous children within the British Asian community who need vital support: “We do have autistic children in our community. It’s brushed under the carpet, autism is. Some people don’t bring their children out. I don’t know if they’re afraid, or what kind of reac-

Guide to buying a wheelchair

mental health, it can be bad to skip meals as it can lead onto dangerous habits.

AsianVoiceNewsweekly yourself and take that extra time for yourselves away from your busy schedule. PHYSICAL DISABILITIES Physical disabilities cover those with loss of limbs, blindness, loss of hearing and those with loss of movement. For those with physical disabilities travelling by public transport is the biggest challenge as many Tube stations are simple not facilitated to suit those with disabilities. The Asian Community Care Servicesis a non-religious and non political self help organisation, set up, managed and run by Asian disabled people and it is a membership organisation with members spread over fourteen local authority areas. They organise several outings throughout the year such as visits to the Neasden Hindu temple. The APDA also provides an Asian Day Respite Care and Development service for Asian adults with physical, mental and learning disabilities and Asian elders. To accommodate those with physical disabilities there are various things that can help. Wheelchair access to public places such as ramps and lifts are useful. Those that suffer from loss of hearing can make use of British Sign Language as the UK government formally recognised that BSL is an

tacted her through Twitter saying that they haven’t been to the Gurdwara in 7 years, because of the way people look at him and his daughter. She states that if there is more of an understanding about disabilities such her daughter then there can be change in attitudes among the Asian community.

Ask for help None of us are superhuman. We all sometimes get tired or overwhelmed by how we feel or when things don’t go to plan.If things are getting too much for you and you feel you can’t cope, ask for help. Your family or friends may be able to offer practical help or a listening ear.Local services such as the Suicide hotline are also there to help you.

MENTAL HEALTH In general, people from black and minority ethnic official language in 2003. Those that suffer from blindness can apply for aides such as guide dogs through charities such as The Guide Dogs For The Blind Association. Those that are living with loss of limbs prosthetics are an option offered by the NHS however, one must go through rigorous physiotherapy and rehabilitation in order to get used to the prosthetic limb and more information can be found out through the NHS website or your GP.

Take a break A change of scene or a change of pace is good for your mental health.It could be a five-minute pause from cleaning your kitchen, a half-hour lunch break at work, or a weekend exploring somewhere new. A few minutes can be enough to de-stress you. Give yourself some ‘me time’. abilities more accepted within the Asian community has received a massive response as someone con-

CHRONIC ILLNESSES Crohns, degenerative diseases such as muscular dystrophy, chronic pain, HIV and many other conditions all fall under chronic illness. The problem with this type of disability is that as with mental and learning disabilities this is an “invisible” disability and it affects a wide age range of people. To highlight the struggle that those go under suffering from a chronic illness the term “Spoonies” have been used or “Spoon” theory has been applied to make able bodied people understand this struggle. Spoons are an intangible unit of measurement used to track how much energy a person has throughout a given day. Each activity requires a given number of spoons, which will only be replaced as the person "recharges" through rest. A person who runs out of

spoons has no choice but to rest until their spoons are replenished. The concept was created by Christine Miserandino in 2003 in her essay The Spoon Theory, which is posted on her website. However, within the Asian community there is a struggle

as those with chronic illness have the struggle of proving to people that they are ill even though the don’t look ill. A student Mathy Selvakumaran has been working as a regional Trailblazer ambassador in the East Midlands to raise awareness about those with disabilities. Mathy said in an interview with the Telegraph, “If you met me and I were sitting down, you might not notice my disability – it’s “hidden” to a degree. I don’t use a wheelchair but I have mobility issues that affect my arms and legs, which makes walking and lifting things difficult. When it comes to relationships, I feel this prevents me from being attractive – and I often get the sense that people judge me on my disability. It feels like I’m “undateable” in some people’s eyes.”